Lakeview is a town in Lake County, Oregon, United States. The population was 2,294 at the 2010 census. It is the county seat of Lake County. The city bills itself as the "Tallest Town in Oregon" because of its elevation. Lakeview is situated in the Goose Lake Valley at the foot of the Warner Mountains and at the edge of Oregon's high desert country. Its economy is based on agriculture, lumber production, and government activities. In addition, tourism is an increasingly important part of the city's economy. Oregon's Outback Scenic Byway passes through Lakeview.

Native Americans may have occupied the area around Lakeview for as much as 14,000 years, as evidenced by artifacts found in the Paisley Caves north of Lakeview. When the first white explorers came through the Goose Lake Valley, Shoshone speaking people were living in the area.

In 1827, Peter Skene Ogden led a brigade of Hudson's Bay Company trappers through the Goose Lake Valley. He was followed in 1832 by John Work and his trappers. Work noted the hot springs north Goose Lake (now called Hunter's Hot Springs) in his journal. The hot springs are approximately 2 miles (3.2 km) north the Lakeview town site.

In 1867 and 1868, General George Crook led United States Army units and Indian scouts from the Wasco and Warm Springs tribes in a successful campaign against Northern Paiute bands in Eastern Oregon and northern California. This was part of the conflict known as the Snake War. Crook used Camp Warner as his supply depot and administrative headquarters. The camp was abandoned in 1874. Camp Warner was located northeast of the site that is now Lakeview.

In 1869, M. W. Bullard settled along Bullard Creek at the mouth of Bullard Canyon at the northern end of the Goose Lake Valley. This is the location that eventually became the town of Lakeview. William Heryford brought cattle into the Goose Lake Valley in 1872. In 1873, the area's first post office was opened at the Tenbrook Ranch, south of present-day Lakeview.

Lake County was separated from Jackson County and Wasco County in 1874. The temporary county seat was located in Linkville (now Klamath Falls, Oregon). In June 1876, an election was held to select a permanent county seat. Prior to the election, W. M. Bullard offered to donate 20 acres (8.1 ha) along Bullard Creek in the Goose Lake Valley as a site for the county courthouse. In the election, "Bullard Creek" received 120 votes while Linkville got only 88 votes. However, a majority of the 384 votes cast was needed to determine the permanent county seat. Bullard Creek fell short because many voters wrote in names like "Goose Lake", "Goose Lake Valley", "Bullard's ranch", or "Bullard's creek". As a result, a second election was scheduled in November 1876. Prior to that election, the town of Lakeview was organized at a meeting of Goose Lake Valley residents. The town site they selected was on Bullard Creek. In the second election, the new town site of Lakeview was select to replace Linkville as Lake County's seat of government. After the election, Bullard donated 20 acres (8.1 ha) for the county courthouse as promised. Bullard sold an additional 300 acres (120 ha) to John A. Moon, who filed a town plat with the state of Oregon, officially creating the town of Lakeview. The Lakeview post office was opened on December 8, 1876.

On May 22, 1900, a fire burned most of Lakeview. No lives were lost, but 64 buildings were destroyed. Only two business structures in the downtown area survived the fire. However, the staff of the Lake County Examiner newspaper rescued enough equipment and material to publish a special edition the day after the fire. Most of the town was rebuilt by October of that year. The town's rapid recovery was due in large part to the financing and leadership provided by Bernard Daly. 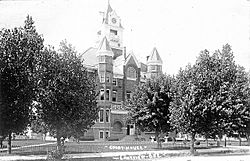 In 1909, the Oregon Valley Land Company conducted a week-long auction to dispose of land grants acquired from the construction of the Oregon Central Military Wagon Road in 1865 and 1869. The auction was advertised nationwide. The rural parcels also included a separate town lot in Lakeview. Thousands of people came to Lakeview for the auction and many others purchased property sight-unseen. During the auction, a total of 340,000 acres (140,000 ha) were sold in approximately 14,000 parcels. Only a few of the buyers ever moved onto the land they purchased. Lake County used part of its income from the sale to finance a new county courthouse. The new brick courthouse was built in the center of town, replacing the wooden building that had served as the county court since 1876.

In 1911, a narrow gauge railway connected Lakeview with Reno, Nevada. The Nevada-California-Oregon Railway operated the line until 1927, when it was sold to the Southern Pacific Railroad. Southern Pacific converted the track to standard gage. The new standard rail connection prompted several sawmills to begin operating in Lakeview, expanding the town's economic base. 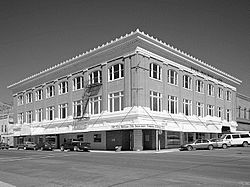 In 1913, William P. Heryford commissioned the construction of a three-story commercial building in downtown Lakeview, across the street from the Lake County courthouse. The Heryford Brothers Building cost approximately $100,000 to construct. When it was completed, the building was the largest and most expensive structure in Lakeview. It was also the most modern, with its own power generator, central stream heat, elevators, electric lights, hot water, and telephones.

By 1940, Lakeview had seven sawmills operating in town. All of the mills had recently installed new dry kilns which allowed year around operations. This increased winter employment opportunities in Lakeview, increasing economic stability in the community. The number of sawmills decrease during World War II, leaving only three by 1946. That year, only 39,000,000 board feet of timber was cut on the Fremont National Forest. However, that national forest's timber harvest increased to 81,200,000 board feet per year by 1952. To accommodate this increase, Lakeview's sawmills were expanded and modernized. In the 1950s, the payrolls and income from Lakeview's sawmills accounted for more than half of the town's economy.

In the mid-1950s, a large number uranium mining claims were filed in the mountains north of Lakeview. However, only two mines, White King and Lucky Lass, were developed. In 1958, a uranium processing plant was built on the outskirts of Lakeview. The mill had the capacity to process 210 tons of uranium ore per day. The mill employed 50 people. Another 120 people were employed at the two mines. The uranium plant closed in 1961.

In 1985, Southern Pacific announced it planned to abandon its spur line to Lakeview. However, the company continued to operate the line until it was purchased by Lake County in January 1986. Lake County contracted operation of the line to Great Western Railway. In 1996, Lake County took over the railroad operation, and renamed it the Lake County Railroad. From 2007, the Modoc Northern Railroad leased the line from the county. In 2009, Frontier Rail began operating the line under the name Lake Railroad.

Lakeview is in the Goose Lake Valley at the foot of the Warner Mountains to the east. It is on the edge of the high desert country of southeastern Oregon. At an elevation of 4,800 feet (1,500 m), Lakeview is one of the highest cities in Oregon.

Lakeview has a typical semiarid continental Mediterranean climate (Köppen Dsb) for the leeward side of the Cascades. Summers are hotter than western Oregon during the daytime, but nights are always cool and rare frosts can occur even during July. Little rainfall occurs during the summers, whilst the winters are cold if not severe given the latitude and elevation, although snowfall can sometimes be heavy – the maximum monthly snow cover being 31 inches (0.79 m) during January 1993 and 44 inches (1.12 m) on the thirteenth day of that month. Typically temperatures fall below 32 °F (0 °C) on 181 nights per year but fall below 0 °F (−17.8 °C) on only five. Extreme temperatures have ranged from −27 °F (−32.8 °C) on December 8, 2013 to 108 °F (42.2 °C) on August 7, 1905.

There were 1,034 households of which 27.5% had children under the age of 18 living with them, 47.7% were married couples living together, 9.4% had a female householder with no husband present, 4.1% had a male householder with no wife present, and 38.9% were non-families. 35.4% of all households were made up of individuals and 15.6% had someone living alone who was 65 years of age or older. The average household size was 2.18 and the average family size was 2.78. 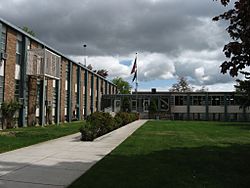 There were 1,037 households out of which 29.1% had children under the age of 18 living with them, 53.3% were married couples living together, 9.7% had a female householder with no husband present, and 32.9% were non-families. 30.2% of all households were made up of individuals and 13.5% had someone living alone who was 65 years of age or older. The average household size was 2.34 and the average family size was 2.85.

Recreation and other points of interest

In the summer, the Fremont–Winema National Forest's Lakeview District provided a number of outdoor recreation opportunities in the area around Lakeview. The Lakeview District has 22 trails open to mountain bike riders. All those trails and more are available for hiking. The national forest has a number of lakes and streams available for sport fishing. There are also camping and picnic sites located near Lakeview.

In the winter, alpine skiers can enjoy their sport at Warner Canyon Ski Area. The ski hill is located in the Fremont–Winema National Forest 10 miles (16 km) northeast of Lakeview on Oregon Route 140. Snowmobiling is also a popular recreation activity during the winter months.

Lakeview is known as one of the best places in North America for hang gliding and paragliding and was designated "the Hang Gliding Capital of the West" in 1991. The national championships for hang gliding were held in Lakeview in 1993, 1997, 2000, and 2008, while the national championships for paragliding were held in Lakeview in 1998 and 2007. And for at least the past twenty years, Lakeview has hosted the "Umpteenth Annual Festival of Free Flight" over the Fourth of July holiday weekend, sponsored by the Lake County Chamber of Commerce, and various local businesses. This event draws pilots and families from all over the United States, as well as other countries, for hang gliding and paragliding. 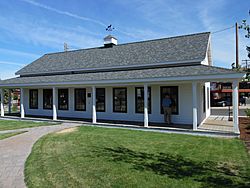 Lakeview is also known for the hot water geyser, Old Perpetual, located at Hunter's Hot Springs. The geyser sometimes go "silent" from about the first of September until around mid-October. Some people attributed this to farm irrigation during the spring and summer; others believe it may be caused by geothermal development the City of Lakeview has undertaken to supply the Warner Creek Correctional Facility with water for heating. However, the city and the Oregon Department of Corrections deny any cause-and-effect relationship between geothermal development and the geyser's periodic dormancy. To date, there is no evidence available to identify the actual cause(s) of the geyser's dormancy.

The Lake Railroad (formerly the Lake County Railroad) is a spur line from Lakeview to Alturas, California. It provides Lakeview with freight service, but does not carry passengers. It is owned by Lake County. The railroad is currently operated by Frontier Rail. Lakeview is 96 mi (154 km) from the passenger train station in Klamath Falls.

All content from Kiddle encyclopedia articles (including the article images and facts) can be freely used under Attribution-ShareAlike license, unless stated otherwise. Cite this article:
Lakeview, Oregon Facts for Kids. Kiddle Encyclopedia.