Harney County is a county located in the U.S. state of Oregon. As of the 2010 census, the population was 7,422, making it the fifth-least populous county in Oregon. The county seat is Burns. Established in 1889, the county is named in honor of William S. Harney, a military officer of the period, who was involved in the Pig War and popular in the Pacific Northwest.

Harney County is a rural county in southeastern Oregon. It is a five hours' drive from Portland, Oregon. The county is bordered by Grant County (to the north), Malheur County (to the east); the State of Nevada (to the south); and Lake, Deschutes, and Crook counties (to the west).

At 10,228 square miles (26,490 km2) in size, the county is the largest in Oregon, and one of the largest in the United States. The county is sparsely populated, with a population of about 7,700. The county has just two incorporated cities: Burns, the county seat and larger city, with 40 percent of the population, and Hines, with 20 percent of the county's population. About 75 percent of the county's area is federal land, variously managed by the Bureau of Reclamation, Bureau of Land Management, U.S. Fish and Wildlife Service, and U.S. Forest Service. About 10 percent of Harney County's area is part of the Ochoco National Forest and Malheur National Forest. The county also contains the Burns Paiute Indian Reservation within and immediately north of the City of Burns; this 760-acres reservation of the Burns Paiute Tribe is a remnant of the former Malheur Indian Reservation, a 1.5-million-acre federal trust land that was encroached upon by white settlement in the 19th century.

Harney County has a "high desert" topography, with low levels of precipitation. About 500 ranches and farms producing cattle, dairy products and hay operate within the county; in the county, cattle outnumber people 14-to-1. Besides ranching and farming, forestry are important industries in the county.

The county is of ecological as well as recreational importance. Along with neighboring Grant County, Harney County has the nation's largest Ponderosa pine forest. The county was also a focus of recent efforts to conserve the sage grouse; in 2014, Harney County ranchers signed 30-year agreements with the federal government to protect the sage grouse. Visitors are attracted to the county for its hunting, fishing, and camping activities.

According to the website of the Harney County Sheriff's Office, the sheriff has a staff of six law enforcement officers. Burns has a separate police department but, as of 2008, did not employ enough officers to provide "24-hour" coverage.

The Native Americans living in this region at the time of the Lewis and Clark Expedition were the Northern Paiute, who fought with the Tenino and Wasco peoples. Peter Skene Ogden was the first known European to explore this area in 1826 when he led a fur brigade for the Hudson's Bay Company.

Harney County was carved out of the southern two-thirds of Grant County on February 25, 1889. A fierce political battle, with armed "night riders" who spirited county records from Harney to Burns, ended with Burns as the county seat in 1890.

The Malheur River Indian Reservation was created by executive order on March 14, 1871, and the Northern Paiute within the Oregon state boundaries were settled there. The federal government "discontinued" the reservation after the Bannock War of 1878. Descendants of these people form a federally recognized tribal entity, the Burns Paiute Tribe, which had 341 members in 2008. Fewer than 35.5% of the tribal members live on the Burns Paiute Indian Colony near Burns. The tribe earns revenue from a small casino, the Old Camp Casino, and renting out communal tribal lands for grazing rights to local ranchers.

On January 2, 2016, the headquarters building of the Malheur National Wildlife Refuge was seized by armed protesters related to the Bundy standoff. The group protested the prison sentences of two ranchers convicted of arson in wildfires set in 2001 and 2006, which the ranchers claimed spread from their land into the wildlife reserve. Militia leaders, including Ammon Bundy and Jon Ritzheimer, were arrested on January 26, 2016, in an event that included the shooting of militant LaVoy Finicum. The following day, only four militants remained, and they surrendered on February 11, 2016. 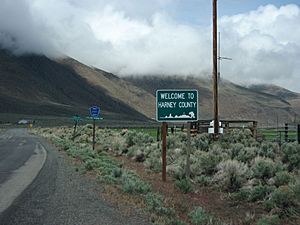 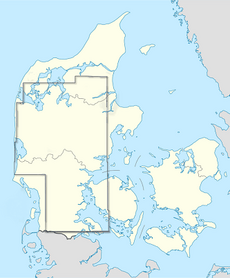 Harney County has a population of less than 8,000 occupying a land area about two-thirds the size of Denmark, shown in this overlay.

Steens Mountain is the county's most prominent geographical feature, rising 9,700 feet (3,000 m) above sea level and spanning many miles across a region that is otherwise fairly flat. To its southeast is the Alvord Desert—the driest place in Oregon—and the Trout Creek Mountains, which extend south into Nevada. South of Steens Mountain, the Pueblo Mountains are another remote range in Oregon and Nevada. North of Steens Mountain lies the Harney Basin, which contains Malheur Lake and Harney Lake.

All content from Kiddle encyclopedia articles (including the article images and facts) can be freely used under Attribution-ShareAlike license, unless stated otherwise. Cite this article:
Harney County, Oregon Facts for Kids. Kiddle Encyclopedia.