Kids Encyclopedia Facts
This page is about the Oregon county. For other uses of the word "Malheur", see Malheur.

Malheur County (pronounce:) is one of the 36 counties in the U.S. state of Oregon. As of the 2020 census, the population was 31,571. Its county seat is Vale, and its largest city is Ontario. The county was named after the Malheur River, which runs through the county. The word "malheur" is French for misfortune or tragedy.

Malheur County was created February 17, 1887, from the southern portion of Baker County. It was first settled by miners and stockmen in the early 1860s. The discovery of gold in 1863 attracted further development, including settlements and ranches. Basques settled in the region in the 1890s and were mainly engaged in sheep raising.

Pillars of Rome, near Rome 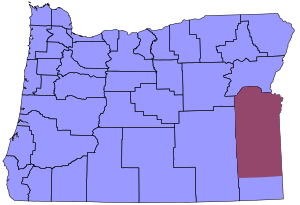 Most of Malheur County (shown in red) is in the Mountain Time Zone; a small portion in the southern part of the county is in the Pacific Time Zone along with the rest of the state of Oregon and neighboring Nevada.
For more details, see Time in Oregon

Because of its economic relationship with Idaho, most of the county is in the Mountain time zone, making it the only county in Oregon that does not completely follow Pacific Time. The largely unpopulated southern quarter of the county, near McDermitt, observes Pacific Time. The legal dividing line between the two begins at the southwest corner of township 35 S, range 37 E and continues east to the Oregon–Idaho border, crossing Highway 95 at approximately 42.45° N. latitude. (Precisely, 42 degrees, 27.166 minutes. The official Oregon sign marking the crossing is in the wrong place, about ten miles north.) Malheur is one of the few counties in the U.S. that legally observes two different time zones. 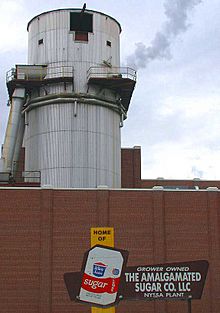 A sugar beet plant of the Amalgamated Sugar Company in Nyssa

The county is 94% rangeland, with the Bureau of Land Management controlling 72% of the land. Irrigated fields in the county's northeast corner, known as Western Treasure Valley, are the center of intensive and diversified farming. Malheur County's economy also depends on tourism.

The county's two largest employers are Heinz of Ontario, a potato processor branded as Ore-Ida, and the Snake River Correctional Institution, five miles northwest of Ontario.

All content from Kiddle encyclopedia articles (including the article images and facts) can be freely used under Attribution-ShareAlike license, unless stated otherwise. Cite this article:
Malheur County, Oregon Facts for Kids. Kiddle Encyclopedia.