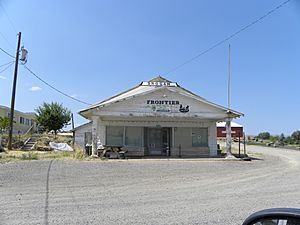 The Frontier store in Brogan

Brogan is an unincorporated community and Census-designated place (CDP) in Malheur County, Oregon, United States, on U.S. Route 26. Brogan was founded by D. M. Brogan in 1909, and when a post office was established in the locality on April 23 of that year, it was named for him. Brogan is located on the north end of the now-abandoned Union Pacific Railroad branch line from Vale.

All content from Kiddle encyclopedia articles (including the article images and facts) can be freely used under Attribution-ShareAlike license, unless stated otherwise. Cite this article:
Brogan, Oregon Facts for Kids. Kiddle Encyclopedia.