Adrian is a city in Malheur County, Oregon, United States, near the confluence of the Snake River and the Owyhee River. The population was 177 at the 2010 census. It is part of the Ontario, OR–ID Micropolitan Statistical Area.

In 1913, Oregon Short Line Railroad built a branch into this part of Malheur County. There was a post office called Riverview on the east side of the Snake River and because the railroad did not want a station of the same name on the west side, the name Adrian was suggested by Reuben McCreary, who platted the townsite. The name was chosen to honor his birthplace, Adrian, Illinois. Riverview post office was established in 1911, but moved across the river in 1915 and the name changed to Adrian in 1919. It was previously thought that the city was named for James Adrian, a sheep rancher, but he did not arrive in the area until 1916.

Adrian is located on the Southern Alternate route of the Oregon Trail, a longer route that eliminated the need to cross the Snake River.

According to the United States Census Bureau, the city has a total area of 0.24 square miles (0.62 km2), all of it land.

According to the Köppen Climate Classification system, Adrian has a semi-arid climate, abbreviated "BSk" on climate maps.

There were 70 households, of which 25.7% had children under the age of 18 living with them, 55.7% were married couples living together, 7.1% had a female householder with no husband present, 1.4% had a male householder with no wife present, and 35.7% were non-families. 27.1% of all households were made up of individuals, and 17.1% had someone living alone who was 65 years of age or older. The average household size was 2.53 and the average family size was 3.20.

It is a part of the Adrian School District 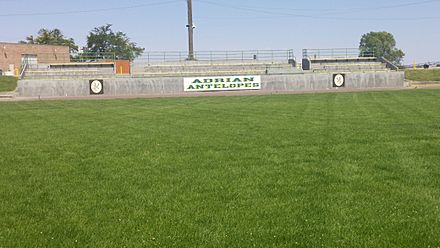 All content from Kiddle encyclopedia articles (including the article images and facts) can be freely used under Attribution-ShareAlike license, unless stated otherwise. Cite this article:
Adrian, Oregon Facts for Kids. Kiddle Encyclopedia.