The Owyhee drains a remote area of the arid plateau region immediately north of the Great Basin, rising in northeastern Nevada and flowing generally northward near the Oregon-Idaho border to the Snake River. Its watershed is very sparsely populated. The Owyhee River and its tributaries flow through the Owyhee Plateau, cutting deep canyons, often with vertical walls and in some places over 1,000 feet (300 m) deep.

The watershed of the river was part of region inhabited by the Shoshone and Bannock Native Americans. The name of the river is from the older spelling of "Hawaii." It was named for three Hawaiian trappers, in the employ of the North West Company, who were sent to explore the uncharted river. They failed to return to the rendezvous near the Boise River and were never seen again. Due to this the river and its region were named "Owyhee."

About one-third of the men with Donald MacKenzie's Snake Country Expeditions of 1819–20 were Hawaiians, commonly called "Kanakas" or "Sandwich Islanders" in those days, with "Owyhee" being a standard period spelling of the proper Hawaiian language name for the islands, hawai'i, which then was otherwise unused in English. The three Kanakas were detached to trap on the river in 1819 and were probably killed by Native Americans that year. It was not until the spring or early summer of 1820 that MacKenzie learned the news of their deaths (probably at the hands of men belonging to a band of Bannocks led by a chief named The Horse). Native Americans led other trappers to the site, but only one skeleton was located. The earliest surviving record of the name is found on a map dating to 1825, drawn by William Kittson (who was previously with MacKenzie in 1819-1820, and then with Peter Skene Ogden in 1825), on which he notes "Owhyhee River" [his spelling]. Journal entries in 1826 by Peter Skene Ogden, a fur trapper who led subsequent Snake Country Expeditions for the Hudson's Bay Company refer to the river primarily as the "Sandwich Island River," but also as "S.I. River," "River Owyhee" and "Owyhee River."

The discovery of gold and silver in the region in 1863 resulted in a temporary influx of miners and the establishment of mining camps, most of which have long since disappeared. The initial discovery was along Jordan Creek, and mining activity rapidly spread through the Owyhee watershed. This activity involved not only placer operations, but also underground mines and mills, resulting in a prolonged history of mining in the region. This invasion of Native American territory set off the 1864–68 Snake War.

The source of the Owyhee River is in northeastern Nevada, in northern Elko County, approximately 50 miles (80 km) north of the city of Elko. It flows north along the east side of the Independence Mountains of Nevada, passing through Wild Horse Reservoir and then cutting northeast past the north end of the range. The river runs through the Humboldt-Toiyabe National Forest, and then past the communities of Mountain City and Owyhee in the Duck Valley Indian Reservation. It then enters southwestern Idaho, flowing northwest for approximately 50 miles (80 km) across the southwest corner of the state through Owyhee County. It is then joined by the South Fork Owyhee River from the south, approximately 10 miles (16 km) east of the Oregon border. The main tributary of the South Fork is the Little Owyhee River.

In northern Malheur County, approximately 20 miles (32 km) upstream from its mouth on the Snake, the Owyhee River is impounded by the Owyhee Dam, creating the serpentine Lake Owyhee, approximately 52 miles (84 km) long. The dam was constructed by the U.S. Bureau of Reclamation primarily to provide irrigation for the agricultural region in southeast Oregon and southwest Idaho, onions and hops are the staple crops in this region. Lake Owyhee State Park and scenic Leslie Gulch are along the eastern shore of the reservoir. Owyhee Dam was built in 1933 and eliminated anadromous fish such as salmon from the Owyhee River basin. 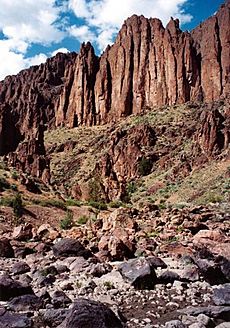 In 1984, the United States Congress designated 120 miles (190 km) of the river as Owyhee Wild and Scenic River under the Wild and Scenic Rivers Act of 1968 to preserve the river in its free-flowing condition. Part of the designation includes the section of the river downstream from the Owyhee Dam, where the river flows through a remote section of deeply incised canyons surrounded by high canyon rims that are habitat for mountain lion, bobcat, Mule Deer, California Bighorn Sheep, and a large variety of raptors.

The Omnibus Public Land Management Act of 2009 designated 323,274 acres (130,824 ha) on and around the Owyhee River in Idaho as wilderness. The bill was signed into law by President Barack Obama on March 30, 2009. The new wilderness areas are:

After negotiations involving Oregon senators Ron Wyden and Jeff Merkley, the Owyhee Act introduced in November 2019. It would preserve 1 million acres (400 thousand hectares) of Owyhee canyonlands as wilderness, while calling for improvements to loop roads to bring in visitors. It also designated 14.7 miles (23.7 km) of the river for protection under the Wild and Scenic Rivers Act. It was supported by both ranchers and conservationists, as well as the Northwest Sport Fishing Association.

All content from Kiddle encyclopedia articles (including the article images and facts) can be freely used under Attribution-ShareAlike license, unless stated otherwise. Cite this article:
Owyhee River Facts for Kids. Kiddle Encyclopedia.