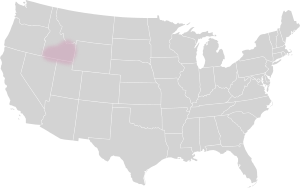 Map of lands traditionally inhabited by the Bannock

The Bannock tribe were originally Northern Paiute but are more culturally affiliated with the Northern Shoshone. They are in the Great Basin classification of Indigenous People. Their traditional lands include northern Nevada, southeastern Oregon, southern Idaho, and western Wyoming. Today they are enrolled in the federally recognized Shoshone-Bannock Tribes of the Fort Hall Reservation of Idaho, located on the Fort Hall Indian Reservation. 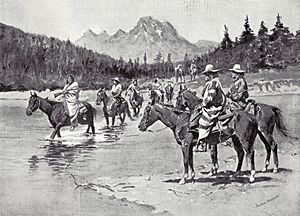 Traditionally, the Northern Paiute traded with surrounding tribes. The bands in eastern Oregon traded with the tribes to the north, who by 1730 had acquired the horse. In the mid-18th century, some bands developed a horse culture and split off to become the Bannock tribe. The horse gave the tribe a greater range, from Oregon to northern Nevada, southern Idaho, and western Wyoming. They forayed from there on the Bannock Trail to Montana and Canada to hunt buffalo.

The Bannock made pottery, utensils from mountain sheep horns, and carrying bags from salmon skin. Their petroglyphs date back before European contact, and, after the introduction of glass beads, they transferred their geometric design to beadwork. For water transport, they made tule reed rafts. Prior to the late 19th century, Bannock people fished for salmon on the Snake River in Idaho and in the fall, they hunted buffalo herds. Buffalo hides provided material for tipis.

In the 2010 Census, 89 people identified as Bannock ancestry, 38 full-blooded. However, 5,315 are enrolled in the Shoshone-Bannock Tribes of the Fort Hall Reservation, not stating specifically their tribe.

All content from Kiddle encyclopedia articles (including the article images and facts) can be freely used under Attribution-ShareAlike license, unless stated otherwise. Cite this article:
Bannock people Facts for Kids. Kiddle Encyclopedia.