Drewsey is an unincorporated community in Harney County, in the U.S. state of Oregon. Drewsey is along the main stem of the Malheur River, about 45 miles (72 km) east of Burns, off U.S. Route 20. It has the ZIP Code of 97904.

The region around Drewsey was frequented by Paiute tribes long before white settlers arrived. They caught salmon in the river and its tributaries and hunted and foraged on the land. Subsequent clashes between the two cultures led to creation of the Malheur Indian Reservation, which included the Drewsey area, in 1872. There the Paiutes and others were expected to learn about white culture and to become farmers. After further clashes, the Indians were re-located from the Malheur region to reservations elsewhere in the West. By the early 1880s, settlers began establishing themselves in and around Drewsey.

Abner Robbins opened a store here in 1883 and named the place "Gouge Eye" to commemorate a local dispute. When Robbins applied for a post office, postal authorities did not accept the original name, so he changed it to "Drusy". When the office was established in 1884, however, it was registered under the name "Drewsey".

Drewsey grew rapidly in the late 19th century, depending on farming and ranching for its economic base. The Pacific Livestock Company, two lumbers mills, and other businesses thrived here through the 1920s. However, bypassed by the nearest east−west railway as well as the main highway, Drewsey lost population during the Great Depression and after. In the 21st century, Drewsey consists of a small number of homes, a combined garage and store with a post office, a tavern and restaurant, two churches, and an elementary school. 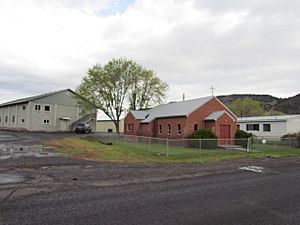 Drewsey Elementary School is in Drewsey. It serves children in kindergarten through grade 8.

In the 21st century, Drewsey is a stop on the Eastern Public Oregon Intercity Transit (POINT) bus line between Bend and Ontario. It makes one stop per day in each direction.

Two roads for cars and trucks lead to the community. Drewsey Road links Drewsey to Route 20, to the south. Drewsey Market Road connects to rural locations to the west along the Malheur River.

All content from Kiddle encyclopedia articles (including the article images and facts) can be freely used under Attribution-ShareAlike license, unless stated otherwise. Cite this article:
Drewsey, Oregon Facts for Kids. Kiddle Encyclopedia.