Kids Encyclopedia Facts
Not to be confused with North Bend, Oregon.

Bend is a city in, and the county seat of Deschutes County, Oregon, United States. It is the principal city of the Bend, Oregon Metropolitan Statistical Area. Bend is Central Oregon's largest city, and despite its modest size, is the de facto metropolis of the region, owing to the low population density of that area. Bend recorded a population of 76,693 at the time of the 2010 U.S. Census, up from 52,029 at the 2000 census. The estimated population of the city as of 2013 is 81,236. Bend's metro population was estimated at 165,954 as of July 1, 2013. The Bend MSA is the fifth largest metropolitan area in Oregon.

Bend is located on the eastern edge of the Cascade Range along the Deschutes River. Here the Ponderosa Pine forest transitions into the high desert, characterized by arid land, junipers, sagebrush, and bitter-brush. Originally a crossing point on the river, settlement began in the early 1900s. Bend was incorporated as a city in 1905. Economically, it started as a logging town but is now identified as a gateway for many outdoor sports, including mountain biking, fishing, hiking, camping, rock climbing, white-water rafting, skiing, paragliding, helicopter tours and golf. In 2015, Men's Journal ranked Bend as one of The 10 Best Places to Live Now. 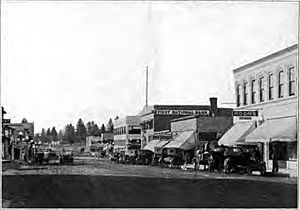 The name Bend was derived from "Farewell Bend", the designation used by early pioneers to refer to the location along the Deschutes River where the town was eventually platted, one of the few fordable points along the river.

For at least 12,000 years, until the winter of 1824, the Bend area was known only to Native Americans who hunted and fished there. That year, members of a fur trapping party led by Peter Skene Ogden visited the area. John C. Frémont, John Strong Newberry, and other Army survey parties came next. Then pioneers heading farther west passed through the area and forded the Deschutes River at Farewell Bend.

Constructed in May 1901, the Pilot Butte Development Company's little plant was the first commercial sawmill in Bend. The original location was at the rear of the Pilot Butte Inn of later years. Steidl and Reed also set up a small mill in Bend in 1903. This was on the Deschutes River just below the Pioneer Park area. The mill was operated by water power. A small community developed around the area, and in 1904, a city was incorporated by a general vote of the community's 300 residents. On January 4, 1905, the city held its first official meeting as an incorporated municipality, appointing A. H. Goodwillie as the first mayor. The settlement was originally called "Farewell Bend", which was later shortened to "Bend" by the U.S. Postal Service.

In 1910, Mirror Pond was created by the construction of the Bend Water, Light & Power Company dam on the Deschutes River in Bend. The dam provided the city with its initial source of electricity. The dam has been owned by Pacific Power since 1926 and still produces electricity that supplies approximately 200 Bend households. In 1916, Deschutes County, Oregon was formed from the western half of Crook County and Bend was designated as the county seat. In 1929, Bend amended the charter and adopted the council-manager form of government. 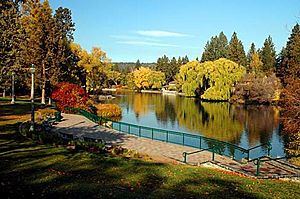 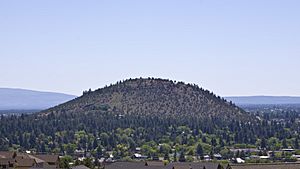 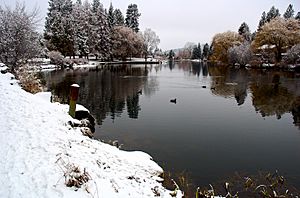 Mirror Pond from Drake Park during the winter

Bend sits on the boundary of the Eastern Cascades Slopes and Foothills, a Level III ecoregion designated by the United States Environmental Protection Agency (EPA) in the U.S. states of Oregon, Washington, and California, and the Deschutes River Valley, a Level IV ecoregion within the Blue Mountains Level III ecoregion. The Deschutes River runs though Bend, where it is dammed to form Mirror Pond. Bend's elevation is 3,623 feet (1,104 m).

Inside the city limits is Pilot Butte State Scenic Viewpoint, an old cinder cone. Bend is one of three cities in the continental U.S. (with Portland, Oregon and Jackson, Mississippi) to have an extinct volcano within its city limits. It is reached by U.S. Route 20.

A lesser known characteristic of Bend, the Horse Lava Tube System enters and borders the eastern edge of the city.

Bend's climate is typical of the high desert with cool nights and sunny days, classified as semi-arid (Köppen BSk). Annual precipitation averages 11.2 in (280 mm), with an annual average snowfall of 23.8 inches (60.5 cm). The winter season in Bend provides a mean temperature of 31.1 °F (−0.5 °C) in December. Nighttime temperatures are not much lower than daytime highs during the winter. According to the USDA Plant Hardiness Zone Map, annually, the lowest nighttime temperature is typically −5 °F (−21 °C) to −10 °F (−23 °C).

Central Oregon summers are marked by their very large diurnal temperature ranges, with a July daily average of 64.5 °F (18.1 °C), and an average diurnal temperature variation approaching 35 °F (19 °C). Hard frosts are not unheard of during the summer months. Autumn usually brings warm, dry days and cooler nights, and Bend is known for its annual Indian summer. 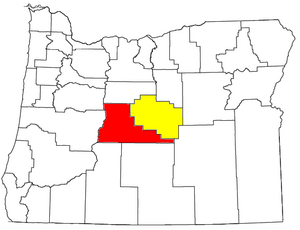 Bend is the larger principal city of the Bend-Prineville CSA, a Combined Statistical Area that includes the Bend metropolitan area (Deschutes County) and the Prineville micropolitan area (Crook County), which had a combined estimated population of 216,310 by the United States Census Bureau in 2008.

There were 31,790 households of which 31.7% had children under the age of 18 living with them, 47.9% were married couples living together, 9.9% had a female householder with no husband present, 4.4% had a male householder with no wife present, and 37.8% were non-families. 27.1% of all households were made up of individuals and 9.1% had someone living alone who was 65 years of age or older. The average household size was 2.39 and the average family size was 2.91. 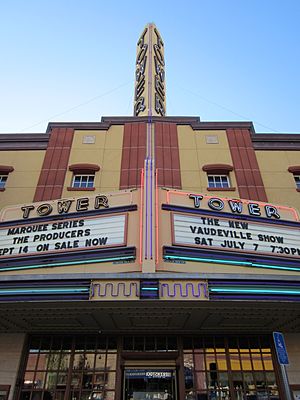 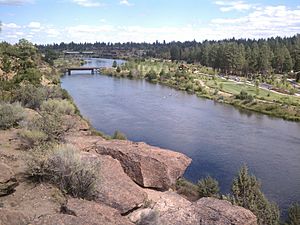 The Bend Hawthorne Transit Center is a hub for the Cascades East Transit center with connections to intercity bus services including the HighDesert Point, Eastern Point, and the Central Oregon Breeze.

Bend was previously the only metropolitan area west of the Mississippi River without a public bus system. A measure that would have created a transit district was on the November 2004 ballot, but was defeated 53 to 41 percent. As of August 2006, however, funding was acquired and the B.A.T. (Bend Area Transit) bus service began on a limited basis. Buses have been running since September 27, 2006.

During the Summer of 2007, not a single bus purchased was in operation (though several were due to weak A/C systems) and litigation was underway.

Bend lies at the intersection of U.S. Route 20 and U.S. Route 97. The latter runs on an expressway alignment through the city known as the Bend Parkway; a business route for US 97 runs along 3rd Street. The city is also served by the Century Drive Highway No. 372 which provides access to Mount Bachelor.

A BNSF mainline runs north-south through the city; there are numerous spurs off of the mainline which serve industrial rail customers. The closest Amtrak service is in the town of Chemult, approximately 65 miles (105 km) to the south; this station is served by the Coast Starlight route.

All content from Kiddle encyclopedia articles (including the article images and facts) can be freely used under Attribution-ShareAlike license, unless stated otherwise. Cite this article:
Bend, Oregon Facts for Kids. Kiddle Encyclopedia.