Mount Bachelor, formerly named Bachelor Butte, is a dormant stratovolcano atop a shield volcano in the Cascade Volcanic Arc and the Cascade Range of central Oregon. Named Mount Bachelor because it stands apart from the nearby Three Sisters, it lies in the eastern segment of the central portion of the High Cascades, the eastern segment of the Cascade Range. The volcano lies at the northern end of the 15-mile (24 km) long Mount Bachelor Volcanic Chain, which underwent four major eruptive episodes during the Pleistocene and the Holocene. The United States Geological Survey considers Mount Bachelor a moderate threat, but Bachelor poses little threat of becoming an active volcano in the near future. It remains unclear whether the volcano is extinct or just inactive.

The Mount Bachelor ski area has operated on the mountain since 1958, and the volcano's summit hosts the Mount Bachelor Observatory. A center of winter recreation, the area offers snowshoeing, snow skiing, snow tubing, and dog sledding, among other activities. The summit can be reached by a climbing trail that travels over lava from the volcano.

Mount Bachelor was formed between 15,000 and 11,000 years ago as a shield volcano but was later capped with a stratovolcano as the eruptions apparently became more explosive over time. It is the youngest prominent volcano in the Three Sisters area of Oregon. Bachelor is composed mainly of basalt and basaltic andesite.

It last erupted between 10,000 and 8,000 years ago and is entirely covered with Mazama Ash from the catastrophic eruption of Mount Mazama about 6,845 years ago. There is no geothermal activity at present, though some areas popularly thought to be fumaroles are caused by air movement through the porous structure. Several are near the top of the Pine Marten chairlift and occasionally present a hazard to skiers and snowboarders where the snow is undermined.

Eruptive activity of the chain can be considered in four major episodes: 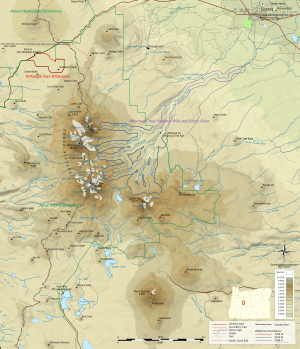 Mount Bachelor ski area operates a chairlift during the summer as well as during the ski season (weather permitting). The resort is one of the largest in the Pacific Northwest with a skiable area of 3,683 acres (14.9 km2) and a vertical drop of 3,365 feet (1,026 m).

All content from Kiddle encyclopedia articles (including the article images and facts) can be freely used under Attribution-ShareAlike license, unless stated otherwise. Cite this article:
Mount Bachelor Facts for Kids. Kiddle Encyclopedia.