Mount Adams, known by some Native American tribes as Pahto or Klickitat, is a potentially active stratovolcano in the Cascade Range. Although Adams has not erupted in more than 1,000 years, it is not considered extinct. It is the second-highest mountain in the U.S. state of Washington, after Mount Rainier.

Adams is a member of the Cascade Volcanic Arc, and is one of the arc's largest volcanoes, located in a remote wilderness approximately 34 miles (55 km) east of Mount St. Helens. The Mount Adams Wilderness consists of the upper and western part of the volcano's cone. The eastern side of the mountain is designated as part of the territory of the Yakama Nation.

Adams' asymmetrical and broad body rises 1.5 miles (2.4 km) above the Cascade crest. Its nearly flat summit was formed as a result of cone-building eruptions from separated vents. Air travelers flying the busy routes above the area sometimes confuse Mount Adams with nearby Mount Rainier, which has a similar flat-topped shape.

The Pacific Crest Trail traverses the western flank of the mountain. 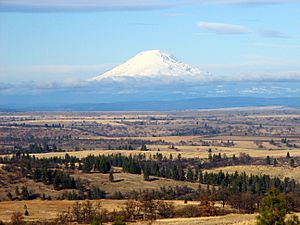 Mount Adams stands 37 miles (60 km) east of Mount St. Helens and about 50 miles (80 km) south of Mount Rainier. It is 30 miles (48 km) north of the Columbia River and 55 miles (89 km) north of Mount Hood in Oregon. The nearest major cities are Yakima, 50 miles (80 km) to the northeast, and the Portland metropolitan area, 60 miles (97 km) to the southwest. Between half and two thirds of Adams is within the Mount Adams Wilderness of the Gifford Pinchot National Forest. The remaining area is within the Mount Adams Recreation Area of the Yakama Indian Reservation. While many of the volcanic peaks in Oregon are located on the Cascade Crest, Adams is the only active volcano in Washington to do so. It is farther east than all the rest of Washington's volcanoes except Glacier Peak.

Standing at 12,281 feet (3,743 m), Adams towers about 9,800 feet (3,000 m) over the surrounding countryside. It is the second-highest mountain in Washington and third-highest in the Cascade Range. Because of the way it developed, it is the largest stratovolcano in Washington and second-largest in the Cascades, behind only Mount Shasta. Its large size is reflected in its 18 miles (29 km)-diameter base, which has a prominent north-south trending axis. 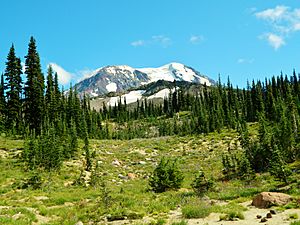 Adams is the source of the headwaters for two major rivers, the Lewis River and White Salmon River. The many streams that emanate from the glaciers and from springs at its base flow into two more major river systems, the Cispus River and the Klickitat River. The streams on the north and west portions of Adams feed the Cispus River, which joins the Cowlitz River near Riffe Lake, and the Lewis River.

To the south, the White Salmon River has its source on the lower flanks of the west side of Adams and gains additional flows from streams along the southwest side of the mountain. Streams on the east side all flow to the Klickitat River. Streams on all sides, at some point in their courses, provide essential irrigation water for farming and ranching. The Klickitat and White Salmon rivers are nearly completely free flowing, with only small barriers to aid irrigation (White Salmon) and erosion control (Klickitat). The Cispus and Lewis rivers have been impounded with dams farther downstream for flood control and power generation purposes.

Mount Adams is the second-most isolated, in terms of access, stratovolcano in Washington; Glacier Peak is the most isolated. Only two major highways pass close to it. Highway 12 passes about 25 miles to the north of Adams through the Cascades. Highway 141 comes within 13 miles of Adams as it follows the White Salmon River valley up from the Columbia River to the small town of Trout Lake. From either highway, travelers have to use Forest Service roads to get closer to the mountain. The main access roads, FR 23, FR 82, FR 80, and FR 21, are paved for part of their length. Most all other roads are gravel or dirt, with varying degrees of maintenance. Access to the Mount Adams Recreation Area is by way of FR 82, which becomes BIA 285 at the Yakama reservation boundary. BIA 285 is known to be extremely rough and often suitable only for trucks or high-clearance vehicles. Two small towns, Glenwood and Trout Lake, are located in valleys less than 15 miles from the summit, Glenwood on the southeast quarter and Trout Lake on the southwest quarter.

Its size and distance from major cities, and the tendency of some people to forget or ignore Mount Adams, has led some people to call this volcano "The Forgotten Giant of Washington."

On a clear day from the summit, other visible volcanoes in the Cascade Range include Mount Rainier, Mount Baker, and Glacier Peak to the north, Mount St. Helens to the west, all in Washington; and Mount Hood, Mount Jefferson, the Three Sisters, Mount Thielsen, Mount Scott, Diamond Peak, and Mount McLoughlin, all to the south in Oregon.

All content from Kiddle encyclopedia articles (including the article images and facts) can be freely used under Attribution-ShareAlike license, unless stated otherwise. Cite this article:
Mount Adams (Washington) Facts for Kids. Kiddle Encyclopedia.