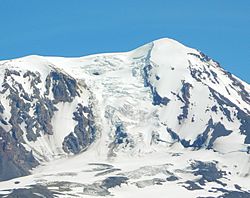 Adams Glacier, the second largest glacier in the contiguous United States, cascading down the 12,281 ft. summit.

Between 11,800 and 9,200 feet (3,600 and 2,800 m), the glacier flows through a steep icefall that provides challenging climbing through a maze of seracs. The first ascent of the glacier was by Fred Beckey, Dave Lind, and Robert Mulhall in July 1945.

Below 8,400 feet (2,600 m), the glacier spreads into a broad sheet with five separate tongues of ice extending out to termini between large moraines. On its easternmost tongue, it ends at a glacial tarn, or small ice-choked lake above High Camp.

In 1901, when Mount Adams was being mapped and its glaciers named by Harry Fielding Reid, Reid's companion and guide, Claude Ewing Rusk, wanted to name the glacier Reid Glacier in honor of Reid; however, Reid insisted that it should be named something else because he thought it improper to place his own name on the map that he was making and the Mazamas were trying to name a glacier on Mount Hood after him. This eventually persuaded Rusk and he conceded to name the glacier Adams Glacier.

All content from Kiddle encyclopedia articles (including the article images and facts) can be freely used under Attribution-ShareAlike license, unless stated otherwise. Cite this article:
Adams Glacier (Mount Adams) Facts for Kids. Kiddle Encyclopedia.