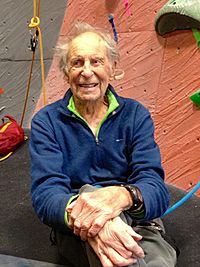 Friedrich Wolfgang Beckey (14 January 1923 – 30 October 2017), known as Fred Beckey, was an American rock climber, mountaineer and author. He made hundreds of first ascents, more than any other North American climber. In 2003, his 563-page book on the history of the region, Range of Glaciers, was published by the Oregon Historical Society Press. Between climbs, he wrote several books, most notably the Cascade Alpine Guide.

Beckey was born in Düsseldorf, Germany. He studied at the University of Washington. Beckey died on 30 October 2017 in Seattle, Washington at the age of 94.

All content from Kiddle encyclopedia articles (including the article images and facts) can be freely used under Attribution-ShareAlike license, unless stated otherwise. Cite this article:
Fred Beckey Facts for Kids. Kiddle Encyclopedia.