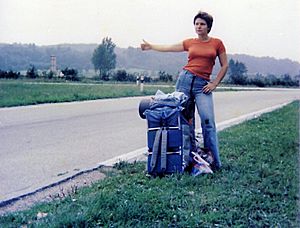 Hitchhiking is a way to end travel from place to place in someone else's car or lorry. Usually, a hitchhiker (a person who hitchhikes) will stand at the side of a road and hold his or her thumb in the air waiting for a passerby to come and pick her or him up. This is a sign that he or she wants to go somewhere else.

It was a very common way of traveling in Europe in the 1970s until people started to go missing. It is common for people to encounter dangerous people while hitchiking, it is not always clear when being picked up if a person is dangerous, and this make it very dangerous and has made it less popular.

Because of this, hitchhiking is illegal or restricted in many country’s and states of America. 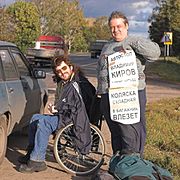 All content from Kiddle encyclopedia articles (including the article images and facts) can be freely used under Attribution-ShareAlike license, unless stated otherwise. Cite this article:
Hitchhiking Facts for Kids. Kiddle Encyclopedia.