The mountains were named for their jagged peaks.

Main page: List of peaks of the Sawtooth Range (Idaho)

The northern Sawtooth Range formed from the Eocene Sawtooth batholith, while south of Alturas Lake the mountains formed from the Cretaceous granodiorite of the Idaho Batholith. The Sawtooth Range has a history of alpine glaciation, but while no surface glaciers exist today, perennial snow fields and rock glaciers remain, usually on north or east facing slopes. There have been 202 perennial snow fields mapped in the Sawtooth Range. The Sawtooth Range was last extensively glaciated in the Pleistocene, but glaciers probably existed during the Little Ice Age, which ended around 1850 AD. Evidence of past glaciation given remnants of the glaciers such as glacial lakes, moraines, horns, hanging valleys, cirques, and arêtes.

In 2010, scientists from Idaho State University discovered the Sawtooth Fault near the base of the mountains, running for 40 mi (64 km) near Stanley and Redfish Lake. The most recent large quakes along it occurred around 4,000 and 7,000 years ago. It is estimated the fault could produce a 7.5 magnitude earthquake, potentially felt as far as Boise. 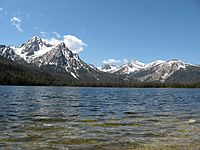 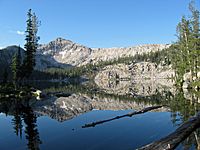 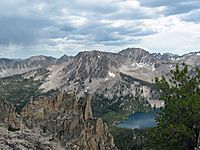 Most of the east side of the Sawtooth Range is drained by the main stem of the Salmon River and the west side by the South Fork Payette River. Small portions of the northern and southern ends of the range are in the watersheds of the Middle Fork Salmon River and Boise River, respectively.

There are 40 trails totaling nearly 350 miles (560 km) in the Sawtooth Wilderness that can be used for day hiking, backpacking, and horseback riding and accessed from 23 trailheads. Additional trails traverse the foothills of the mountains outside the designated wilderness. Camping is permitted anywhere in the wilderness. There are several developed campgrounds on the western side of range, outside the Sawtooth Wilderness, including at Redfish, Little Redfish, Alturas, Pettit, and Stanley lakes, as well as at Iron Creek. Restrictions on fires and animals apply in some areas.

Sawtooth Range as photographed in Stanley

All content from Kiddle encyclopedia articles (including the article images and facts) can be freely used under Attribution-ShareAlike license, unless stated otherwise. Cite this article:
Sawtooth Range (Idaho) Facts for Kids. Kiddle Encyclopedia.