Blaine County is a county in the U.S. state of Idaho. As of the 2010 census, the population was 21,376. The county seat and largest city is Hailey.

Blaine County was created by the state legislature on March 5, 1895, by combining Alturas and Logan counties. Its present boundaries were set on February 8, 1917, when a western portion became Camas County. The county is named after former congressman and 1884 Republican presidential nominee James G. Blaine (1830–93).

Blaine County is part of the Hailey, ID Micropolitan Statistical Area. It is home to the Sun Valley ski resort, adjacent to Ketchum. 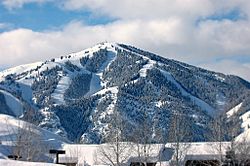 The Wood River Valley in present-day Blaine County was organized as part of Alturas County by the Idaho Territorial Legislature in 1864. By the 1880s the area became noted for its mining economy. In 1882 the county seat of Alturas County was moved from Rocky Bar in present-day Elmore County to Hailey, in response to a population shift from Rocky Bar – which would eventually become a ghost town – to the Wood River Valley.

After Idaho statehood in 1890, as in the rest of the state, mining gradually decreased in significance in Blaine County. At its creation in March 1895, Blaine County included five other present-day counties. Less than two weeks later, Lincoln County was carved from it and later partitioned into Gooding (1913), Minidoka (1913), and Jerome (1919) counties. Blaine County was further reduced in 1917 when Camas County was formed.

The county began to recast itself as a tourism destination in 1936 with the opening of the Sun Valley resort, originally owned by the Union Pacific Railroad. The area soon attracted celebrity visitors, and later residents, most notably Ernest Hemingway, who is buried in the Ketchum Cemetery. Celebrities who have lived either full-time or part-time in Blaine County include Adam West, Demi Moore, and John Kerry.

Most Blaine County residents live in the Wood River Valley along State Highway 75 in the western half of the county. This area includes all of the county's incorporated cities and towns except Carey, which is located in the south-central part of the county at the junction of US 20 with US 26/93. The county's gerrymandered southeastern panhandle, known locally as the Yale area, is very sparsely populated.

As the home of a major ski resort, Blaine County expectedly has a much higher cost of living than surrounding areas; the median value of its owner-occupied housing units is more than double the state average. As a result, many who work in Blaine County live in outlying areas, particularly in the city of Shoshone in neighboring Lincoln County. It is estimated that 2,540 people from outside the county commute to work in Blaine County.

Blaine County is home to events and festivals throughout the year, including Wagon Days, Trailing of the Sheep Festival, Sun Valley Harvest Festival, and the Sun Valley for the Arts Wine Auction.

The Blaine County Fair is an annual summer event.

All content from Kiddle encyclopedia articles (including the article images and facts) can be freely used under Attribution-ShareAlike license, unless stated otherwise. Cite this article:
Blaine County, Idaho Facts for Kids. Kiddle Encyclopedia.