Hailey is a city in and the county seat of Blaine County, in the Wood River Valley of the central part of the U.S. state of Idaho. The population was 7,960 at the 2010 census, up from 6,200 in 2000. Hailey is the site of Friedman Memorial Airport (SUN), the airport for the resort area of Sun Valley/Ketchum, 12 miles (19 km) north. The town of Bellevue is a few miles south. From 1882 to 1895, Hailey was the county seat of now-defunct Alturas County.

The city is named after John Hailey, a two-time Congressional delegate from the Idaho Territory.

According to the United States Census Bureau, the city has a total area of 3.65 square miles (9.45 km2), all of it land.

Hailey has a continental Mediterranean climate (Köppen Dsb). Winters are cold and snowy: there are an average of forty-four days each year which fail to top 32 °F or 0 °C, whilst 199 nights fall below freezing and nineteen nights between November and March will fall to or below 0 °F or −17.8 °C. Spring warms up slowly, with snow falling as late as May. Summer is hot during the day, but cools off into the 40s or 50s at night. Highs reach 90 °F or 32.2 °C on only 15 days per year, and only July has made it to 100 °F or 37.8 °C. Freezing nights can happen any time of the year, even in July and August. There is little rain, coming only as isolated showers or storms a few times per month. Most days are sunny and this is the driest part of the year. Fall starts warm in September and then quickly cools off. Snow has fallen in September, but usually holds off until October. Early fall is dry and sunny like summer. Days in the 70s can happen well into October, but −20 °F or −28.9 °C has been recorded in November. The lowest temperature recorded was −28 °F (−33.3 °C) on January 12, 1963 and the record high is 100 °F (37.8 °C) on July 19, 1953. Precipitation falls primarily as snow in winter and as thunderstorms in late spring. The rest of the year is mostly dry.

There were 3,065 households, of which 41.0% had children under the age of 18 living with them, 51.1% were married couples living together, 11.0% had a female householder with no husband present, 5.0% had a male householder with no wife present, and 33.0% were non-families. Of all households 25.8% were made up of individuals, and 6% had someone living alone who was 65 years of age or older. The average household size was 2.58 and the average family size was 3.15. 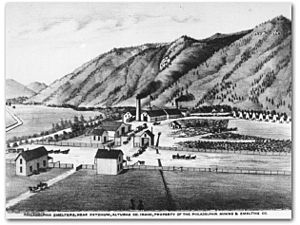 West of town, Hailey has its own ski hill called Rotarun Ski Area, which is much smaller than its local cousin at the Sun Valley Resort.

Other mountains in Hailey are Carbonate, Red Devil Peak (6594 ft.), and Della (6729 ft.). These mountains are popular for hiking, mountain biking, dog walking and other outdoor activities.

Hailey is the home to Sun Valley Magazine, a quarterly publication focusing on fine dining, real estate and local events. Hailey has two local newspapers: The Idaho Mountain Express and The Weekly Sun. The Idaho Mountain Express is located in Ketchum and is published every Wednesday and Friday. The Weekly Sun is located in Hailey and is published every Wednesday.

Snowboard Magazine was founded in Hailey, Idaho in the year 2004 by local resident Mark Sullivan. The magazine quickly grew to the 3rd largest snowboarding publication in the world before being sold to Storm Mountain Publishing in 2007.

Every year, the town of Hailey, Idaho celebrates Independence Day as Days of the Old West. The celebration consists of four major events. Main Street is cleared and the sidewalks fill with spectators. At noon, a mock old west shoot out takes place in the centre of town. The next event is a parade. After the parade, spectators gather at Hop Porter Park for food and music. Activities also include a rodeo and fireworks.

The Silver Creek Alternative School provides a different avenue for students who have struggled in a typical school setting.

The College of Southern Idaho's Blaine Country Center is located in Hailey.

Private education options in the area include the Sage School in Hailey for 6th through 12th grade students and the Community School in neighboring Sun Valley for elementary through high school students.

In 1988, Bruce Willis and his wife Demi Moore moved to Hailey and spent millions revitalizing the downtown and buying up land. The actor renovated buildings, opened a diner, bought a dive bar and a movie theater on the main street, and arranged for a Virginian theater group to relocate to the town. He initially did so anonymously, purchasing the establishments and vacant lots under the name of his company, Ix Nay Investment Trust. Local journalists eventually blew his cover, much to Willis' dismay. His establishments would go on to employ a significant percentage of the small town's active population. In May 1998, he abruptly closed Shorty's (the diner) and the Mint (the dive bar), putting many Hailey residents out of work. Additionally, he withdrew most investments from the town, leaving many outstanding projects unrealized. In 2018, he sold his 20-acre ranch in Hailey for $5.5 million.

Other notable residents include:

All content from Kiddle encyclopedia articles (including the article images and facts) can be freely used under Attribution-ShareAlike license, unless stated otherwise. Cite this article:
Hailey, Idaho Facts for Kids. Kiddle Encyclopedia.