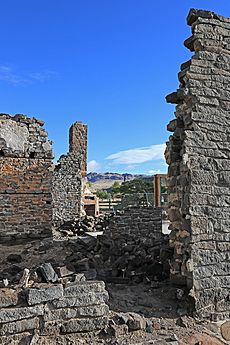 Elmore County is a county located in the U.S. state of Idaho. As of the 2010 census, the population was 29,130. The largest city and county seat is Mountain Home.

Elmore County was established February 7, 1889, with its county seat at Rocky Bar. It is named after the Ida Elmore mines, the area's greatest silver and gold producer of the 1860s, located near Silver City in Owyhee County.

A station on the overland stage route, originally named Rattlesnake, was moved west to the railroad line and became Mountain Home. On February 4, 1891, the county seat was moved to Mountain Home.

Construction of what would become Mountain Home Air Force Base was begun in October 1942, 12 miles (19 km) southwest of Mountain Home. The base officially opened in August 1943 as a training base for bombers, and was an operational base under SAC through 1965. It became a fighter base in 1966 under TAC, now the Air Combat Command.

Anderson Ranch Dam is east of Mountain Home on the South Fork of the Boise River. At the time of its completion in 1950, it was the world's highest earthfill dam.

All content from Kiddle encyclopedia articles (including the article images and facts) can be freely used under Attribution-ShareAlike license, unless stated otherwise. Cite this article:
Elmore County, Idaho Facts for Kids. Kiddle Encyclopedia.