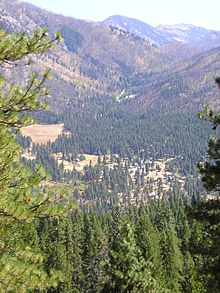 It was founded in 1864 during the Civil War as a gold and silver mining community and named by Southerners after a rumored Confederate victory over General Sherman in the Battle of Atlanta, which turned to be wholly false, but the name stuck. Mining activity near Atlanta preceded its establishment as a mining community. The John Stanley party discovered gold on the nearby Yuba River on July 20, 1864, just two days prior to the battle back in Georgia. That November, John Simmons made the discovery of the Atlanta lode which contained both gold and silver.

Atlanta is at an elevation of 5,383 feet (1,641 m) above sea level surrounded by the Boise National Forest, located near the headwaters of the Middle Fork of the Boise River, approximately 2 miles (3 km) east of the mouth of the Yuba River. The Sawtooth Mountains are directly north, the Sawtooth Wilderness starts about a mile (1.6 km) north of Atlanta, at the base of Greylock Mountain, which summits at 9,363 feet (2,854 m).

Idaho City is approximately 35 miles (56 km) due west, as the crow flies. Galena Summit on State Highway 75 is about 25 air miles (40 km) to the east-northeast.

Atlanta is about 40 miles (64 km) from two paved highways. It is east of State Highway 21, accessed on unimproved U.S. Forest Service roads. Atlanta is north of U.S. Highway 20, which is accessed by heading south on USFS roads through Rocky Bar, Featherville, and Pine. The junction with US-20 is just east of the Anderson Ranch Reservoir on the South Fork of the Boise River Atlanta can also be accessed by following the unimproved road from Arrowrock Dam which climbs with the Middle Fork of the Boise River.

Though founded as a mining community, and a number of private claims remain in the area, no significant commercial mining has occurred in the area for over 50 years, though more recently inquiries into opening a new plant have seen some headway. In place of mining, Atlanta has diversified into areas such as tourism, back-country activities, and preservation of the town's lengthy historic legacy.

All content from Kiddle encyclopedia articles (including the article images and facts) can be freely used under Attribution-ShareAlike license, unless stated otherwise. Cite this article:
Atlanta, Idaho Facts for Kids. Kiddle Encyclopedia.