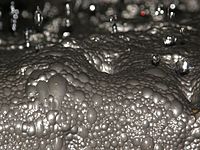 Foam rich of solids produced during a flotation process.

Flotation is used to separate sulfide ores from the impurities in the ore (gangue). A detergent is added to the mixture and it is stirred. The sulfide minerals float, while the gangue sinks to the bottom and is removed. This is used in making zinc, where zinc sulfide (sphalerite) is a major zinc ore.

All content from Kiddle encyclopedia articles (including the article images and facts) can be freely used under Attribution-ShareAlike license, unless stated otherwise. Cite this article:
Flotation Facts for Kids. Kiddle Encyclopedia.