The Saint Elias Mountains (French: Chaîne Saint-Élie) are a subgroup of the Pacific Coast Ranges, located in southeastern Alaska in the United States, Southwestern Yukon and the very far northwestern part of British Columbia in Canada. The range spans Wrangell-St. Elias National Park and Preserve in the United States and Kluane National Park and Reserve in Canada and includes all of Glacier Bay National Park in Alaska. In Alaska, the range includes parts of the city/borough of Yakutat and the Hoonah-Angoon and Valdez-Cordova census areas.

This mountain range is named after Mount Saint Elias, which in turn was named in 1741 by the Danish explorer Vitus Bering. 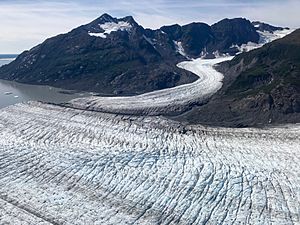 Yakutat Icefield – an expanse of ice in southeast Alaska – in 2018.

The St. Elias Mountains formed at the plate boundary between the Yakutat and North American plates. The up-to-12-kilometre (7.5 mi)-thick sediments that have been deposited on top of the Yakutat plate became imbricated and deformed as they were scraped off and compose today the southern (coastal) flanks of the St. Elias Mountains. In contrast the high elevated regions of the drainage divide (Bagley Icefield, Seward Glacier) and north of it are composed of rocks that are part of the North American plate. The highest peaks of the St. Elias Mountains are located in the high ice field region of the Kluane National Park (Mount Logan, Mount Vancouver) and north of the Malaspina Glacier (Mount Saint Elias, Mount Cook), in the region known as the St. Elias syntaxis. At the syntaxis region the tectonic style changes from strike-slip motion along the Fairweather Fault to collision west of Malaspina Strait. This tectonic transition concentrates stress in the crust at the syntaxis that together with efficient glacial erosion results in positive feedback processes that through time forms extreme high mountain peaks and local relief, and rapid exhumation of rocks from up to 10 km depths to the surface.

The mountains are divided by the Duke Depression, with the shorter, more rounded Kluane Ranges to the east, and the higher Icefield Ranges to the west. Sub-ranges of the Saint Elias include the Alsek Ranges, the Fairweather Range, and the Centennial Range.

The highest mountains of the range include:

All content from Kiddle encyclopedia articles (including the article images and facts) can be freely used under Attribution-ShareAlike license, unless stated otherwise. Cite this article:
Saint Elias Mountains Facts for Kids. Kiddle Encyclopedia.