Mount Kennedy is a peak in the Saint Elias Mountains within Kluane National Park, in Yukon, Canada. Its 4250-m to 4300-m (14000-foot) summit lies within 10 km of the Alaska Panhandle. Dusty Glacier lies against it to the north.

The Canadian government named the peak in honour of U.S. President John F. Kennedy nearly a year following his assassination. In announcing the decision to the House of Commons on November 20, 1964, prime minister Lester B. Pearson said "I believe it is appropriate that Canada's memorial to him should be a mountain. A mountain is solid and enduring. Mount Kennedy is a graceful, towering, unencumbered peak ... a symbol of aspiration and upward reach." It was at the time, the highest peak in North America that had not yet been climbed. American mountaineer Bradford Washburn who had aided the Canadian government in selecting the peak said that "the Canadians sought a mountain that had not previously been named, that towered lofty and magnificent, and that lay as close as possible to the international boundary, where it would endure as a symbol of the unique friendship that exists between our two great nations." 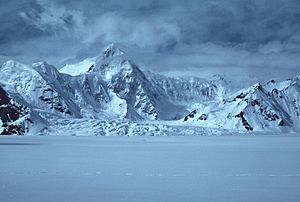 Mount Kennedy from the Lowell Glacier to the north. 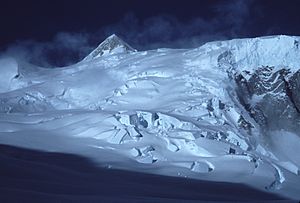 Mount Kennedy from the south.

Its first ascent was in 1965 by JFK's brother Robert F. Kennedy, with a party of experienced mountaineers sponsored by the National Geographic Society and led by Jim Whittaker. Upon reaching the peak of the summit, Kennedy left some of his brother's PT-boat tie clips, a copy of his brother's Inaugural Presidential Address, and a John F. Kennedy medallion. This route from the Cathedral Glacier to the south is now considered a routine climb for experienced glacier travelers, having little technical difficulties other than navigation of extensive crevasse fields and avoidance of avalanches. Since then, other routes have been completed, including the highly technical North Buttress, first climbed in 1968 using siege tactics (placing fixed ropes and returning to a base camp), and finally in 2001 in purely alpine style (continuous ascent from bottom to summit with no fixed ropes).

All content from Kiddle encyclopedia articles (including the article images and facts) can be freely used under Attribution-ShareAlike license, unless stated otherwise. Cite this article:
Mount Kennedy Facts for Kids. Kiddle Encyclopedia.