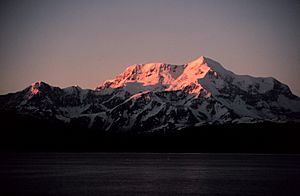 Mount Saint Elias the first part of the North American mainland to be seen by Russian explorers, in 1741.

The first people to reach the top were Luigi Amedeo (Duke of Abruzzi) and his expedition, in 1897.

All content from Kiddle encyclopedia articles (including the article images and facts) can be freely used under Attribution-ShareAlike license, unless stated otherwise. Cite this article:
Mount Saint Elias Facts for Kids. Kiddle Encyclopedia.