Mount Churchill is a volcano in the Saint Elias Mountains and the Wrangell Volcanic Field of eastern Alaska. Churchill and its higher neighbor Mount Bona about 2 mi (3 km) to the southwest are both large ice-covered stratovolcanoes, with Churchill being the fourth highest volcano in the United States and the seventh highest in North America.

Mount Churchill is most noteworthy as the source of the White River Ash, deposited during two of the largest volcanic eruptions in North America during the past two millennia. This twin-lobed tephra deposit covers more than 130,000 square miles (340,000 km2) of eastern Alaska and northwestern Canada, with the northern lobe deposited 1900 years ago and extending over 250 miles (400 km) and the larger eastern lobe about 1,250 years ago and stretching over 500 miles (800 km). The total volume of the ash exceeds 12 cubic miles (50 km3), or roughly 50 times the volume of the 1980 eruption of Mount St. Helens, and ash layers up to 2 feet (61 cm) thick can be seen just below the surface in many roadcuts along the Alaska Highway.

The extensive ash deposits in the lowlands near the White and Yukon Rivers were first recognized in 1883, but their source remained a mystery for the next century. Geologists in the 1960s traced the two lobes of the ash back into the Saint Elias Mountains, and postulated that the ash may have come from a vent now buried under the Klutlan Glacier, which flows east for over 40 mi (64 km) from the Bona-Churchill massif into the Yukon Territory of Canada. More detailed studies in the 1990s by the U.S. Geological Survey finally produced the definitive answer. Aerial photos showed a 2.6 by 1.7 miles (4.2 km × 2.7 km) elliptical, gently sloping, ice-filled depression at 14,500 feet (4,400 m) just east of the present summit of Mount Churchill. This was identified as a caldera, which had formed by the collapse of the volcano's previous summit during the cataclysmic eruptions. The geological field work revealed thick young pumice deposits along the rim of the caldera which are mineralogically and chemically identical to the White River Ash. 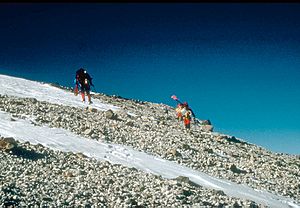 U.S. Geological Survey climbing party reaching the east rim of the summit caldera on Mount Churchill. Blocky debris in the photo consists of pumice and lithic fragments ejected 1,250 years ago, during the eruption which formed the eastern lobe of the White River Ash.

Mount Churchill was first climbed in 1951 by R. Gates and J. Lindberg, but the peak was merely an unnamed satellite of Mount Bona at the time. The mountain was named in 1965 by the Alaska State Legislature for English statesman Winston Churchill.

In terms of elevation, it is a major North American peak, at well over 15,000 feet (4,600 m); however, in terms of topographic prominence or isolation, it is less significant, with less than a 1200-foot drop from its summit to the saddle with Bona. Churchill also lies on the northern, gentler side of the Bona massif, making it a less visually spectacular peak than some of the lower outliers of Bona such as University Peak or Aello Peak. The current standard climbing route is the South Ridge, usually as part of a climb of Mount Bona from the east starting from a ski-equipped bush plane landing at around 10,000 feet (3,000 m) on the Klutlan Glacier.

All content from Kiddle encyclopedia articles (including the article images and facts) can be freely used under Attribution-ShareAlike license, unless stated otherwise. Cite this article:
Mount Churchill Facts for Kids. Kiddle Encyclopedia.