It is a well known peak in Washington, although it lacks high prominence, and elevation. It is well known for having high quality alpine climbing, with a short approach since the completion of The Washington Pass Highway. A mixture of high quality granite and difficult rock has made it a very popular weekend climbing area. Routes range from 5.6 class and grade II, to 5.12a class, and grade IV to V.

Liberty Bell Mountain features 18 named traditional climbing routes. Liberty Crack is featured in Fifty Classic Climbs of North America. The first ascent was on September 27, 1946 by Fred Beckey, Jerry O’Neil, and Charles Welsh by way of what is now known as the Beckey route. 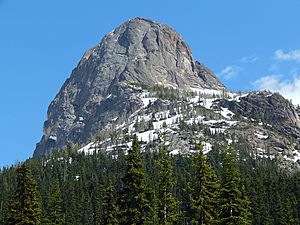 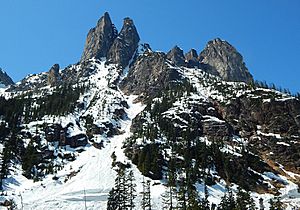 Weather fronts originating in the Pacific Ocean travel northeast toward the Cascade Mountains. As fronts approach the North Cascades, they are forced upward by the peaks of the Cascade Range (Orographic lift), causing them to drop their moisture in the form of rain or snowfall onto the Cascades. As a result, the west side of the North Cascades experiences high precipitation, especially during the winter months in the form of snowfall. During winter months, weather is usually cloudy, but, due to high pressure systems over the Pacific Ocean that intensify during summer months, there is often little or no cloud cover during the summer. Because of maritime influence, snow tends to be wet and heavy, resulting in high avalanche danger. The North Cascades Highway east of Washington Pass has the distinction of being among the top areas in the United States for most avalanche paths per mile of highway. The months July through September offer the most favorable weather for viewing or climbing Liberty Bell Mountain. 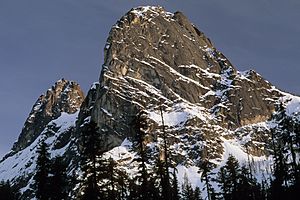 The history of the formation of the Cascade Mountains dates back millions of years ago to the late Eocene Epoch. With the North American Plate overriding the Pacific Plate, episodes of volcanic igneous activity persisted. In addition, small fragments of the oceanic and continental lithosphere called terranes created the North Cascades about 50 million years ago. Like many of the peaks of the Washington Pass area, Liberty Bell Mountain is carved from granite of the Golden Horn batholith. 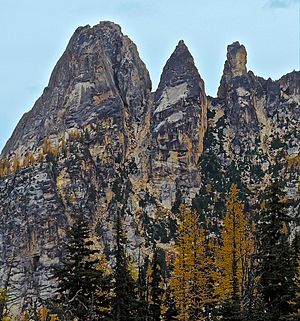 All content from Kiddle encyclopedia articles (including the article images and facts) can be freely used under Attribution-ShareAlike license, unless stated otherwise. Cite this article:
Liberty Bell Mountain Facts for Kids. Kiddle Encyclopedia.