Mount Despair is a rugged mountain in the North Unit of North Cascades National Park in Washington state. Northeast of Mount Despair lies the Picket Range.

The mountain's name was given by Lage Wernstedt of the U.S. Forest Service who mapped the region in the 1920s. The name Mount Despair first appeared on Forest Service maps in 1931.

Mount Despair is located in the marine west coast climate zone of western North America. Most weather fronts originate in the Pacific Ocean, and travel northeast toward the Cascade Mountains. 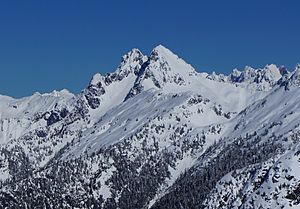 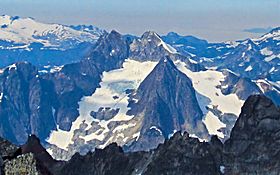 Mount Despair from the east featuring its glacier

All content from Kiddle encyclopedia articles (including the article images and facts) can be freely used under Attribution-ShareAlike license, unless stated otherwise. Cite this article:
Mount Despair (Washington) Facts for Kids. Kiddle Encyclopedia.