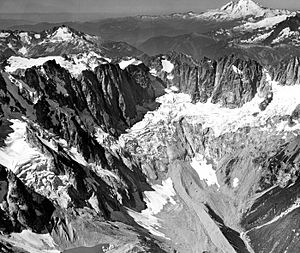 Picket Range at the head of Luna Creek, looking west (1960)

The Picket Range is a small, extremely rugged subrange of the North Cascades in the northwestern part of the American state of Washington. It is entirely contained within North Cascades National Park. It is about 6 miles (9.7 km) long, running northwest–southeast, and lies north of the Skagit River, west of Ross Lake, and east of Mounts Baker and Shuksan. There are at least 21 peaks in the range over 7,500 ft (2,300 m) high.

Swedish American Lage Wernstedt of the U.S. Forest Service mapped the Picket Range in the 1920s and named it for its resemblance to a picket fence (and not for George Pickett). Wernstedt was also apparently responsible for the names of the main peaks, including Mt. Challenger, Fury, Terror, and Phantom. These names first appeared on maps in 1931.

There are few trails in the Picket Range, and any excursion there has a strong wilderness character. Most of the access points are characterized as steep brush thick valleys, with little open terrain. Many of the peaks are challenging rock climbs. The rock is biotite gneiss, formed by metamorphism of sedimentary and volcanic rocks about 100 million years ago.

The Picket Range is home to many of the North Cascades' classic climbs and many of its best technical climbs. The rugged terrain has attracted many photographers to the range, creating some of the most spectacular images in the national park. The rugged and sharp peaks are unmatched in steepness and jaggedness by any other ranges in the lower 48 American states. This has made it a popular area in the National Park, and has contributed to the Cascades' title of "The American Alps". 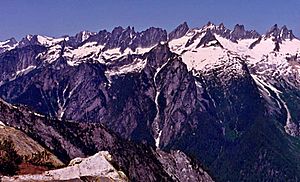 Notable Peaks of the Picket Range

All content from Kiddle encyclopedia articles (including the article images and facts) can be freely used under Attribution-ShareAlike license, unless stated otherwise. Cite this article:
Picket Range Facts for Kids. Kiddle Encyclopedia.