Some of the major cities along the length of the arc include Portland, Seattle, and Vancouver, and the population in the region exceeds 10,000,000 people. All could be potentially affected by volcanic activity and great subduction-zone earthquakes along the arc. Because the population of the Pacific Northwest is rapidly increasing, the Cascade volcanoes are some of the most dangerous, due to their eruptive history and potential for future eruptions, and because they are underlain by weak, hydrothermally altered volcanic rocks that are susceptible to failure. Consequently, Mount Rainier is one of the Decade Volcanoes identified by the International Association of Volcanology and Chemistry of the Earth's Interior (IAVCEI) as being worthy of particular study, due to the danger it poses to Seattle and Tacoma. Many large, long-runout landslides originating on Cascade volcanoes have inundated valleys tens of kilometers from their sources, and some of the inundated areas now support large populations.

The Cascade Volcanoes are part of the Pacific Ring of Fire, the ring of volcanoes and associated mountains around the Pacific Ocean. The Cascade Volcanoes have erupted several times in recorded history. Two most recent were Lassen Peak in 1914 to 1921 and a major eruption of Mount St. Helens in 1980. It is also the site of Canada's most recent major eruption about 2,350 years ago at the Mount Meager volcanic complex.

The Cascade Arc includes nearly 20 major volcanoes, among a total of over 4,000 separate volcanic vents including numerous stratovolcanoes, shield volcanoes, lava domes, and cinder cones, along with a few isolated examples of rarer volcanic forms such as tuyas. Volcanism in the arc began about 37 million years ago; however, most of the present-day Cascade volcanoes are less than 2,000,000 years old, and the highest peaks are less than 100,000 years old. Twelve volcanoes in the arc are over 10,000 feet (3,000 m) in elevation, and the two highest, Mount Rainier and Mount Shasta, exceed 14,000 feet (4,300 m). By volume, the two largest Cascade volcanoes are the broad shields of Medicine Lake Volcano and Newberry Volcano, which are about 145 cubic miles (600 km3) and 108 cubic miles (450 km3) respectively. Mount Garibaldi and Glacier Peak are the only two Cascade volcanoes that are made exclusively of dacite

The 1980 eruption of Mount St. Helens was one of the most closely studied volcanic eruptions in the arc and one of the best studied ever. It was a Plinian style eruption with a VEI=5 and was the most significant to occur in the lower 48 U.S. states in recorded history. An earthquake at 8:32 a.m. on May 18, 1980, caused the entire weakened north face to slide away. An ash column rose high into the atmosphere and deposited ash in 11 U.S. states. The eruption killed 57 people and thousands of animals and caused more than a billion U.S. dollars in damage.

Mount Meager produced the most recent major eruption in Canada, sending ash as far away as Alberta. The eruption was similar to the 1980 eruption of Mount St. Helens, sending an ash column approximately 20 km (12 mi) high into the stratosphere. This activity produced a diverse sequence of volcanic deposits, well exposed in the bluffs along the Lillooet River, which is defined as the Pebble Creek Formation. The eruption was episodic, occurring from a vent on the north-east side of Plinth Peak. An unusual, thick apron of welded vitrophyric breccia may represent the explosive collapse of an early lava dome, depositing ash several meters in thickness near the vent area. 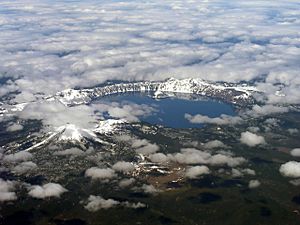 The 7,700 BP eruption of Mount Mazama was a large catastrophic eruption in the U.S. state of Oregon. It began with a large eruption column with pumice and ash that erupted from a single vent. The eruption was so great that most of Mount Mazama collapsed to form a caldera and subsequent smaller eruptions occurred as water began to fill in the caldera to form Crater Lake. Volcanic ash from the eruption was carried across most of the Pacific Northwest as well as parts of southern Canada.

About 13,000 years ago, Glacier Peak generated an unusually strong sequence of eruptions depositing volcanic ash as far away as Wyoming.

Most of the Silverthrone Caldera's eruptions in the Pacific Range occurred during the last ice age and was episodically active during both Pemberton and Garibaldi Volcanic Belt stages of volcanism. The caldera is one of the largest of the few calderas in western Canada, measuring about 30 kilometres (19 mi) long (north-south) and 20 kilometres (12 mi) wide (east-west). The last eruption from Mount Silverthrone ran up against ice in Chernaud Creek. The lava was dammed by the ice and made a cliff with a waterfall up against it. The most recent activity was 1000 years ago.

Mount Cayley in the Pacific Range last erupted about 20,000 years ago. It contains several complex features which probably represent multiple eruptions under different conditions and are difficult to classify.

Mount Garibaldi in the Pacific Range was last active about 10,700 to 9,300 years ago from a cinder cone called Opal Cone. It produced a 15 km (9.3 mi) long broad dacite lava flow with prominent wrinkled ridges. The lava flow is unusually long for a silicic lava flow.

Panorama from the northwest of Mount Baker and the Black Buttes

During the mid-19th century, Mount Baker erupted for the first time in several thousand years. Fumarole activity remains in Sherman Crater, just south of the volcano's summit, became more intense in 1975 and is still energetic. However, an eruption is not expected in the near future.

Mount Adams was last active about 1,000 years ago and has created few eruptions during the past several thousand years, resulting in several major lava flows, the most notable being the A. G. Aiken Lava Bed, the Muddy Fork Lava Flows, and the Takh Takh Lava Flow. One of the most recent flows issued from South Butte created the 4.5-mile (7.2 km) long by 0.5-mile (0.80 km) wide A.G. Aiken Lava Bed. Thermal anomalies (hot spots) and gas emissions (including hydrogen sulfide) have occurred especially on the summit plateau since the Great Slide of 1921.

Mount Hood was last active about 200 years ago, creating pyroclastic flows, lahars, and a well-known lava dome close to its peak called Crater Rock. Between 1856 and 1865, a sequence of steam explosions took place at Mount Hood.

A great deal of volcanic activity has occurred at Newberry Volcano, which was last active about 1,300 years ago. It has one of the largest collections of cinder cones, lava domes, lava flows and fissures in the world.

Medicine Lake Volcano has erupted about eight times in the past 4,000 years and was last active about 1,000 years ago when rhyolite and dacite erupted at Glass Mountain and associated vents near the caldera's eastern rim.

Mount Shasta last erupted in 1786 and has been the most active volcano in California for about 4,000 years, erupting once every 300 years. The 1786 eruption created a pyroclastic flow, a lahar and three cold lahars, which streamed 7.5 miles (12.1 km) down Shasta's east flank via Ash Creek. A separate hot lahar went 12 miles (19 km) down Mud Creek.

Eruptions in the Cascade Range

Eleven of the 13 volcanoes in the Cascade Range have erupted at least once in the past 4,000 years, and seven have done so in just the past 200 years. The Cascade volcanoes have had more than 100 eruptions over the past few thousand years, many of them explosive eruptions. However, certain Cascade volcanoes can be dormant for hundreds or thousands of years between eruptions, and therefore the great risk caused by volcanic activity in the regions is not always readily apparent.

When Cascade volcanoes do erupt, pyroclastic flows, lava flows, and landslides can devastate areas more than 10 miles (16 km) away; and huge mudflows of volcanic ash and debris, called lahars, can inundate valleys more than 50 miles (80 km) downstream. Falling ash from explosive eruptions can disrupt human activities hundreds of miles downwind, and drifting clouds of fine ash can cause severe damage to jet aircraft even thousands of miles away.

All of the known historical eruptions have occurred in Washington, Oregon and in Northern California. The two most recent were Lassen Peak in 1914 to 1921 and a major eruption of Mount St. Helens in 1980. Minor eruptions of Mount St. Helens have also occurred, most recently in 2006. In contrast, volcanoes in southern British Columbia, central and southern Oregon are currently dormant. The regions lacking new eruptions keep in touch to positions of fracture zones that offset the Gorda Ridge, Explorer Ridge and the Juan de Fuca Ridge. The volcanoes with historical eruptions include: Mount Rainier, Glacier Peak, Mount Baker, Mount Hood, Lassen Peak, and Mount Shasta.

Renewed volcanic activity in the Cascade Arc, such as the 1980 eruption of Mount St. Helens, has offered a great deal of evidence about the structure of the Cascade Arc. One effect of the 1980 eruption was a greater knowledge of the influence of landslides and volcanic development in the evolution of volcanic terrain. A vast piece on the north side of Mount St. Helens dropped and formed a jumbled landslide environment several kilometers away from the volcano. Pyroclastic flows and lahars moved across the countryside. Parallel episodes have also happened at Mount Shasta and other Cascade volcanoes in prehistoric times.

Washington has a majority of the very highest volcanoes, with 4 of the top 6 overall, although Oregon does hold a majority of the next highest peaks. Even though Mount Rainier is the tallest, it is not the largest by volume. Mount Shasta in California is the largest by volume, followed by Washington's Mount Adams. Mount Rainier is thus the 3rd largest by eruptive volume. Below is a list of the highest Cascade Volcanoes:

All content from Kiddle encyclopedia articles (including the article images and facts) can be freely used under Attribution-ShareAlike license, unless stated otherwise. Cite this article:
Cascade Volcanic Arc Facts for Kids. Kiddle Encyclopedia.