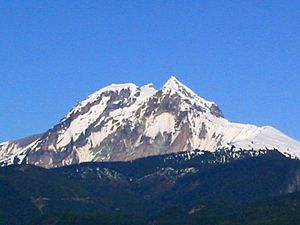 Mount Garibaldi, as seen from Squamish.

Mount Garibaldi is an eroded, dacitic strato volcano in southwestern British Columbia. Both Garibaldi and Mount Baker to its south are part of the Cascade volcanic arc. Mount Garibaldi, 80 km due north of Vancouver, is made up of Mount Garibaldi, Atwell Peak,and Dalton Dome. This Pleistocene volcanic center is part of a volcanic field that contains some 13 vents in an area 30 km long by 15 km wide, much of which is in Garibaldi Provincial Park.

The eruptive history of Mt Garibaldi involves an initial period of volcanism (200,000-300,000 years ago) followed by a period of quiescence. Renewed activity in the last 50,000 years has rebuilt the edifice in a series of violent eruptions, like when Mount Pelee erupted in 1902 and destroyed the town of St. Pierre on the island of Martinique. As successive pyroclastic flows travelled down the mountain's gentle slopes and were deposited, the volcano took on a broad, conical form. Part of the volcano's southwest flank built out onto thick glacial ice filling the Squamish River valley. Subsequent rapid melting of the ice at the close of the last ice age removed support from the western part of the cone. The volcano collapsed,producing much of the existing rugged topography of Mount Garibaldi and Atwell Peak. This catastrophic failure left a scarp on which is exposed the internal structure of the volcano and a debris fan with an estimated volume of 150,000,000 m at the foot of the mountain north of the town of Squamish. As valley glaciers retreated, two lava flows erupted Clinker Peak, immediately north of Mt. Garibaldi. The northernmost Rubble Creek flow was party confined by a wall of ice, resulting in a lava flow over 244 m (800 ft) thick. The steep, northern edge of the Rubble Creek flow party collapsed several times, most recently in 1855-1856; the village of Garibaldi was abandoned because of the danger of future collapses. The most recent period of activity occurred shortly after the disappearance of the glacial ice filling the valley, 10,700 to 9,300 radiocarbon years ago, and ended with the eruption the Ring Creek lava flow from Opal cone on Garibaldi's southeastern flank.

The Ring Creek flow is very unusual. It is 15 km long - a length usually only attained by basalt flows,except that the Ring Creek flow is dacite. Renewed volcanism in the Garibaldi area would pose a serious threat to the local communities of Whistler and Squamish. Although no Plinian-style eruptions are known, even Pelean-type eruptions could produce large quantities of ash that could rise to several hundred meters above the volcano. As it is close to Vancouver, this would make it a hazard for air traffic. The danger from lava flows would be low to moderate because the nature of the lavas would prevent them from travelling far from their source,even though the Ring Creek lava flow ends only 6 km from Squamish. Melting of remnant glacial ice capping the Mt. Garibaldi area could produce floods, lahars,or debris flows that might endanger small communities including Brackendale.

Highway 99, which links Whistler and Squamish with Vancouver, is already plagued by landslides and dedris flows from the precipitous Coast Mountains. An eruption producing floods could destroy segments of the highway. Flooding and debris flows could also have serious coneequences for the salmon fishery on the Squamish, Cheakamus, and Mamquam rivers. In addition,explosive eruptions and the accompanying ash could cause short and long-term water-supply problems for Vancouver and much of the lower mainland. The catchment area for the Greater Vancouver watershed is downwind from the Garibaldi area. Air-fall material could also have a deleterious effect on the ice fields to the east of Mt. Garibaldi, causing increased melting and spring flooding. This in turn could theaten water supplies from Pitt Lake as well as fisheries on the Pitt River.

All content from Kiddle encyclopedia articles (including the article images and facts) can be freely used under Attribution-ShareAlike license, unless stated otherwise. Cite this article:
Mount Garibaldi Facts for Kids. Kiddle Encyclopedia.