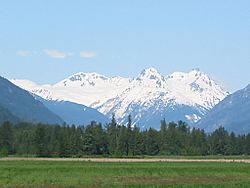 The Mount Meager volcanic complex as seen from the east near Pemberton, BC.

Mount Meager is a potentially active volcano in the Canadian province of British Columbia, Canada, 150 kilometers north of Vancouver. The top of the mountain is mostly covered by snow and glaciers. It lies in the Garibaldi Volcanic Belt and is the northernmost volcano of the Cascade Volcanic Arc that extends down to northern California. Its most common type of rock is lava that is almost a million years old (with a thickness in some places over 1 km).

The mountain is part of the Pacific Ranges of mountains and is 2,680 meters (8,793 feet) high. It was previously called Cathedral Mountain.

Meager is known for its last major eruption about 2,350 years ago. The strange thing about the eruption was the fact it released the debris from the northeast side of the volcano, as rock and ash blocked a major river called the Lillooet River. The river was dammed to a height of at least 100 meters, forming a lake. The lake reached a maximum elevation of 810 meters and was at least 50 meters deep. The breccia soon eroded from water activity within the lake, forming Keyhole Falls. There was a massive flood when the water first broke through the breccia, carrying small house sized blocks of breccia. During this eruption, ash was hurled into the air over 20 kilometers above sea level. The ash was carried eastward as far as Alberta.

Meager is an unstable volcano. It is built of unstable volcanic and has dumped clay and rock several meters deep into the Perberton Valley at least three times during the last 7,300 years. Two earlier debris flows, around 4,450 and 7,300 years ago, sent rubble at least 32 kilometers from the volcano. Recently, the volcano has created smaller landslides about every ten years, including one in 1975 that killed four geologists near Meager Creek. Logging, mining, tourism and wilderness recreation on nearby slopes and valleys are vulnerable to the volcano’s excellent geomorphic activity. The possibility of Mount Meager covering settled parts of the Pemberton Valley in a debris flow is estimated at about one in 2400 years. There is no sign of volcanic eruptions with these events, however scientists warn the volcano could release another massive debris flow over populated areas anytime without warning.

The explosive nature of past eruptions at Mount Meager indicates that this volcano also poses a considerable long-distance treat to communities across southern British Columbia and Alberta. It is also a local treat to the town of Pemberton, British Columbia, about 50 km away. Another explosive eruption at Mount Meager would also have a considerable impact on local mining and logging operations, as well as significant negative impacts on the Lillooet River fishery.

All content from Kiddle encyclopedia articles (including the article images and facts) can be freely used under Attribution-ShareAlike license, unless stated otherwise. Cite this article:
Mount Meager Facts for Kids. Kiddle Encyclopedia.