Kids Encyclopedia Facts
Not to be confused with Wasco, Oregon.

Wasco County is one of the 36 counties in the U.S. state of Oregon. As of the 2020 census, the population was 25,213. Its county seat is The Dalles. The county is named for a local tribe of Native Americans, the Wasco, a Chinook tribe who live on the south side of the Columbia River. It is near the Washington state line.

Celilo Falls on the Columbia River served as a gathering place and major trading center for the local Native Americans, including the Wasco, Paiute, and Warm Springs tribes, for thousands of years. These rapids came to be named Les Grandes Dalles de la Columbia or "The Great Falls of the Columbia" by the French Canadian fur traders.

The Dalles served initially as a way station on the Oregon Trail as it approached the Willamette Valley. The construction of the Barlow Road over the Cascade Range in 1845, and the Donation Land Claim Act of 1850 encouraged families to settle in the area. Over the following years, Wasco County was a major transportation hub for both river and inland traffic.

The Oregon Territorial Legislature created Wasco County on January 11, 1854, from the parts of Clackamas, Lane, Linn and Marion counties, that were east of the Cascade Range. At the time of its creation, it was the largest county in the United States, consisting of 130,000 square miles (340,000 km2) that stretched clear to the Rocky Mountains. Its northern border was the Washington Territory line (the Columbia River). When Dakota Territory (including present-day Wyoming) was created in 1861, Idaho Territory in 1863, and Montana Territory in 1864, the parts of Wasco County east of the present Oregon boundaries were ceded to those territories. Other Oregon counties were split away, and Wasco was reduced to its current size. 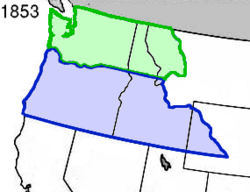 Oregon Territory is shown in blue. Everything east of the Cascades was part of the original Wasco County.

The Dalles was designated the county seat with the creation of the county, and has been its only location.

The river traffic on the Columbia River was profoundly affected in 1935 by the building of Bonneville Dam in Multnomah County and by The Dalles Dam in 1957 in Wasco County (which submerged Celilo Falls).

Wasco County attracted international attention in the 1980s, when Bhagwan Shree Rajneesh went to the United States and settled for several years at a marginal ranch called "The Big Muddy", but later known as Rajneeshpuram. Disagreements over zoning rules and building codes in the beginning continued to escalate between not only his followers and the inhabitants of Wasco County, but eventually with the rest of the state. His followers, known as Rajneeshees, settled en bloc in Antelope, Oregon and were able to elect a majority of the town councillors. Acerbic, if not hostile comments by his spokeswoman, Ma Anand Sheela, only increased tensions, and were not helped by Rajneesh's vow of silence. When the Rajneeshees subsequently recruited homeless people from across the United States to settle at Rajneeshpuram, it was widely seen as an attempt to use the ballot box to seize control of the county. But perhaps the most bizarre turn of events was when an outbreak of salmonella in salad bars at ten restaurants in The Dalles was traced to the acts of his followers. About this time, Sheela was removed from her post in Rajneesh's service.

This chapter in the county's history finally ended in 1985, when Rajneesh was arrested as he was fleeing the U.S. On October 23, 1985, a federal grand jury in Portland had secretly indicted Rajneesh, Sheela, and six other of his followers for immigration crimes. Two days later, a Wasco County grand jury returned indictments against Sheela and two others, charging them with the attempted murder of Swami Devaraj, Rajneesh's personal doctor. Rajneesh entered an Alford plea and was given a suspended sentence on condition that he leave the country.

The former Rajneesh ranch is now known as "Washington Family Ranch". It is owned and operated by Young Life Ministries, a Christian organization providing camp services for youth. 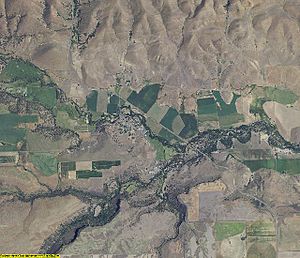 An aerial view of the county 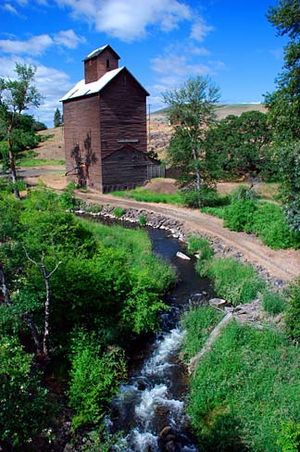 The county's economy is based upon agriculture (orchards, wheat farming, livestock ranching), lumber, manufacturing, electric power, transportation, and tourism. Aluminum production was previously a major support of the local economy, but electrical price fluctuations and a slump in global aluminum prices has forced the closing of a number of local aluminum foundries.

All content from Kiddle encyclopedia articles (including the article images and facts) can be freely used under Attribution-ShareAlike license, unless stated otherwise. Cite this article:
Wasco County, Oregon Facts for Kids. Kiddle Encyclopedia.