Kids Encyclopedia Facts
Not to be confused with Wheeler, Tillamook County, Oregon. 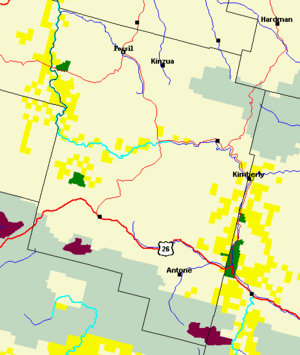 Wheeler County is a county in the U.S. state of Oregon. As of the 2020 census, the population was 1,451, making it Oregon's least populous county. It is named in honor of Henry H. Wheeler, an early settler who owned a farm near Mitchell. The county seat is Fossil, and Wheeler County is known for having Oregon's largest deposit of fossils.

Wheeler County was created on February 17, 1899, from parts of Grant, Gilliam, and Crook Counties. There have been no boundary changes since its creation. Fossil was designated the temporary county seat at the time of the county's creation. In 1900 there was an election to determine the permanent county seat between the three towns of the county, which ended with Fossil winning the election.

Principal industries in this county are agriculture, livestock, and lumber.

All content from Kiddle encyclopedia articles (including the article images and facts) can be freely used under Attribution-ShareAlike license, unless stated otherwise. Cite this article:
Wheeler County, Oregon Facts for Kids. Kiddle Encyclopedia.