Morrow County is one of the 36 counties in the U.S. state of Oregon. As of the 2020 census, the population was 12,186. The county seat is Heppner. The county is named for one of its first white settlers, Jackson L. Morrow, who was a member of the state legislature when the county was created. Half of the Umatilla Chemical Depot, which includes the Umatilla Chemical Agent Disposal Facility, and the Naval Weapons Systems Training Facility Boardman are located within the county. Morrow County is part of the Pendleton-Hermiston, OR, Micropolitan Statistical Area. It is located on the south side of the Columbia River and is included in the eight-county definition of Eastern Oregon.

The principal industries in the county today include agriculture, food processing, lumber, livestock, and recreation. The Columbia River also provides Morrow County with a number of related jobs. A coal-fired generating plant in Boardman also employs a significant number of people. 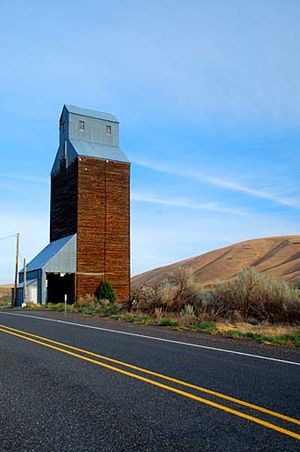 A grain elevator just outside Ione

Early cattlemen found an abundance of rye along the creek bottoms of the region and drove their herds into the area to forage on these natural pastures. Ranching was the primary economic force in the county for many years. Increased settlement, the enclosure of the free grazing lands and diminished pastures due to overgrazing, resulted in the decline of ranching during the 19th century, and farming became predominant. The completion of rail lines into the county in 1883 increased access to markets and encouraged wheat production in the area. The advent of technology for center pivot irrigation has been a further stimulus to the local economy.

The Port of Morrow, situated on the Columbia River near the city of Boardman, was established in 1957.

All content from Kiddle encyclopedia articles (including the article images and facts) can be freely used under Attribution-ShareAlike license, unless stated otherwise. Cite this article:
Morrow County, Oregon Facts for Kids. Kiddle Encyclopedia.