Hermiston is a city in Umatilla County, Oregon, United States. Its population of 19,354 makes it the largest city in Eastern Oregon. Hermiston is the largest, and fastest-growing, city in the Hermiston-Pendleton Micropolitan Statistical Area, the eighth largest Core Based Statistical Area in Oregon with a combined population of 92,261 at the 2020 census. Hermiston sits near the junction of I-82 and I-84, and is 7 miles south of the Columbia River, Lake Wallula, and the McNary Dam. The Hermiston area has become a hub for logistics and data center activity due to the proximity of the I-82 and I-84 interchange, Pacific Northwest fiber optic backbone, and low power costs. The city is also known for its watermelons, which are part of its branding.

The historic inhabitants of the area were the indigenous Umatilla, Cayuse, Walla Walla, and Columbia Indians, descendants of peoples who lived in this area for thousands of years. The earliest European settlers were Catholic missionaries who established a mission near Pendleton in 1847. The territorial government organized Umatilla County in 1862 from the larger Wasco County. On July 10, 1907, the town of Hermiston was incorporated. Robert Louis Stevenson's novel, "The Weir of Hermiston", inspired the name. 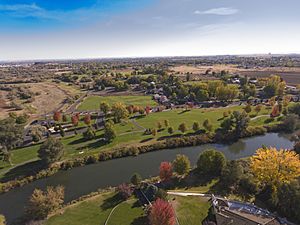 The City of Hermiston Parks Department maintains 10 parks, 13 landscape areas, and 100 plus acres for the enjoyment of the community. In addition to the developed parks, the Department also has 50 additional acres planned for future development. Recent major enhancements include the additions of Riverfront Park, the Oxbow Trail, and continual additions to the Hermiston Family Aquatic Center. Riverfront Park features 16 acres of open grassy areas alongside the Umatilla River, as well as nearly a mile of paved walking paths, playground equipment, picnic shelters, restrooms, and fishing access. A 1.8 mile paved walking path, named the Oxbow Trail, was added in 2015 to connect Riverfront Park with the north side of town near Good Shepherd Medical Center. The Trail winds through protected wetland area for nearly the entirety of its length and also connects to Harrison Park. 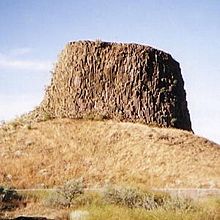 Hat Rock, located on the Columbia River near Hermiston, was one of the first landmarks of the area noted by Lewis and Clark in their journals. 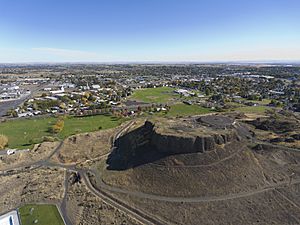 Hermiston's recent population growth is due to its proximity to large cities in the Pacific Northwest and its location along two major freeways.

According to the Köppen climate classification system, Hermiston has a steppe climate (Köppen BSk).

As of the U.S. Census of 2020, there were 19,354 people residing in the city, a growth of 2,609 residents since the 2010 Census. Due to its consistent growth registering as an outlier among rural communities across the U.S., the 2020 Census figure far out-paced the Census Bureau's 2019 estimate for the community of 17,782. This same phenomenon occurred with the community's 2010 Census count far exceeded government estimates from 2009.

There were 6,050 households, of which 42.0% had children under the age of 18 living with them, 47.9% were married couples living together, 14.5% had a female householder with no husband present, 6.8% had a male householder with no wife present, and 30.8% were non-families. 25.8% of all households were made up of individuals, and 9.9% had someone living alone who was 65 years of age or older. The average household size was 2.74 and the average family size was 3.28. 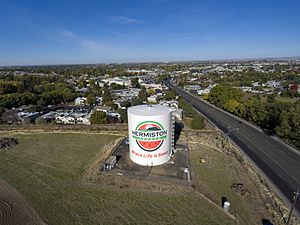 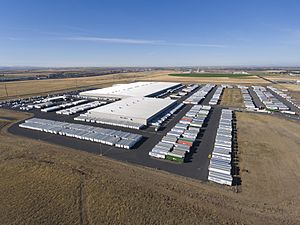 Hermiston benefits from being near the exact center of the Pacific Northwest, and at the crossroads of several major interstate highways. Drivers can easily access all four major Northwest metropolitan areas in just a half-day's drive. Portland is less than 3 hours to the West, and drivers can also reach Spokane in less than 3 hours to the east, while Seattle and Boise are both approximately 4 hours away to the northwest and southeast, respectively. Highways serving Hermiston include Interstate 84 and U.S. Route 30, both of which run east–west, U.S. Route 395, which runs north-south, and Interstate 82, which has its southern terminus near Hermiston and continues north to Ellensburg, Washington.

Hermiston is on the La Grande Subdivision of the Union Pacific Railroad, constructed originally through the area in the 1870s as the Oregon Railroad and Navigation Company. Railroad facilities include the Hinkle Locomotive Service and Repair Facility and "hump yard" located just outside the city.

Tri-Cities Airport is located approximately 40 minutes north of Hermiston, and offers commercial flights to Seattle, Salt Lake City, Denver, Minneapolis, Las Vegas, Portland, San Francisco, and Phoenix. In 2014, due to strong growth in demand, the Port of Pasco approved a $42 million renovation and expansion, that will double the size of the current terminal. 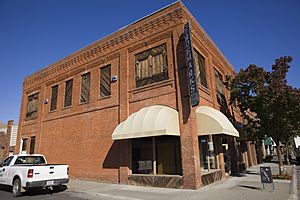 Hermiston serves as the retail and services center for much of western Umatilla County, as well as Morrow County and parts of Gilliam county. Hermiston's Local Trade Area, which describes the area where people will travel to purchase items on a weekly basis, stretches from Pendleton on the East, the Columbia River to the North, Heppner to the South, and Gilliam County to the West. There were 46,000 people living within Hermiston's Local Trade Area based on 2010 U.S. Census data. Major national chain retailers in Hermiston include Wal-Mart, Home Depot, Big Lots, Sears, AutoZone, Big 5 Sporting Goods and Harbor Freight, among many others. The community also has Ford, Chevy, Dodge, Toyota, and Subaru dealerships. Despite a relatively robust local retail & services market, Hermiston experiences significant retail sales leakage to the Tri-Cities for items purchased on less than a weekly basis. The Tri-Cities, located approximately 30 minutes north of Hermiston in Washington, had a metro-area population of 275,740 as of April 1, 2014, making it the fourth largest metropolitan area in Washington.

Hermiston has the largest 30-mile-radius workforce in Eastern Oregon. According to 2018 U.S. Census estimates, there were 135,503 people actively employed within a 30-mile radius of Hermiston; in comparison, there are 75,075 in the next-largest regional Labor Shed in Bend. Hermiston-area employers benefit greatly from the proximity of the Tri-Cities in Washington which, based on light traffic, and easy freeway access, is approximately 30–35 minutes to the north of Hermiston. This proximity also allows dual-income households good access to employment opportunities for both wage earners. 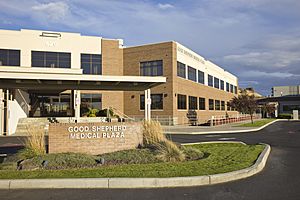 According to Hermiston's 2019 Comprehensive Annual Financial Report, the top employers in the city are: 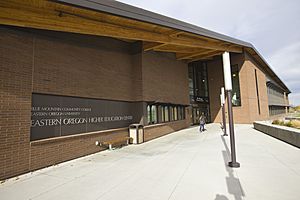 Hermiston School District is the largest district in Eastern Oregon, with 5,297 students in the 2014–15 school year. The district has one high school, Hermiston High School, which hosts 1,500 students. Due to the school's size, it is able to offer comprehensive programming and courses for all students. The district also is composed of two middle schools, five elementary schools, and 1 alternative school. There are also two private schools in Hermiston.

Voters in the Hermiston School District have shown strong support for education as the district has experienced sustained robust enrollment growth. Voters approved a $69.9 million capital construction bond in November, 2008, and another $82.7 million capital construction bond in November, 2019. The 2019 bond will add a new elementary school near the intersection of NE 10th and Theater Lane, and will replace the 57-year old Rocky Heights Elementary School on-site with a larger facility. The 2019 bond will also add capacity for an additional 200 students at Hermiston High School.

All content from Kiddle encyclopedia articles (including the article images and facts) can be freely used under Attribution-ShareAlike license, unless stated otherwise. Cite this article:
Hermiston, Oregon Facts for Kids. Kiddle Encyclopedia.