Ellensburg is a city in and the county seat of Kittitas County, Washington, United States. It is located just east of the Cascade Range near the junction of Interstate 90 and Interstate 82. The population was an estimated 21,111 as of 2019.

The city is located along the Yakima River in the Kittitas Valley, an agricultural region that extends east towards the Columbia River. The valley is a major producer of timothy hay, which is processed and shipped internationally. Ellensburg is also the home of Central Washington University (CWU).

Ellensburg, originally named Ellensburgh for the wife of town founder John Alden Shoudy, was founded in 1871 and grew rapidly in the 1880s following the arrival of the Northern Pacific Railway. The city was once a leading candidate to become the state capital of Washington, but its campaign was scuppered by a major fire in 1889. 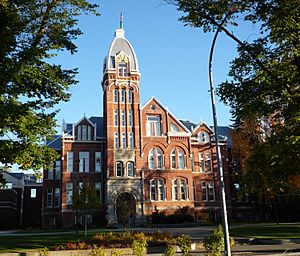 Ellensburg was officially incorporated on November 26, 1883. John Alden Shoudy came to the Kittitas Valley in 1871, and purchased a small trading post from Andrew Jackson "A.J." Splawn, called "Robber's Roost." Robber's Roost was the first business in the valley, other than the early trading that occurred among American Indians, cattle drivers, trappers, and miners. Robber's Roost was located on the present-day 3rd Avenue, just west of Main Street near the alley. There is a placard on the wall commemorating the location, as well as a small stone monument against the wall on the sidewalk. Shoudy named the town after his wife, Mary Ellen Shoudy, thus officially began the city of Ellensburgh around 1872. Shoudy was not the first settler in the Kittitas Valley, nor was he the first businessperson, but he was responsible for platting the city of Ellensburgh in the 1870s, and he was the person who named the streets in the downtown district.

The city was originally named Ellensburgh, until the final -h was dropped under standardization pressure from the United States Postal Service and Board of Geography Names in 1894.

There were several early newspapers in Ellensburg. The Daily Record, however, began in 1909 and is the name of the local newspaper today.

Concerns over the state of Ellensburg's historic downtown led to the formation of the Ellensburg Downtown Association to work on revitalizing the area.

The City of Ellensburg is home to a number of local art museums and galleries:

Every first Friday of each month, Ellensburg hosts First Friday Art Walk from 5:00 to 7:00 pm. This downtown event showcases art of all forms. The local businesses, galleries and museums come alive with art, music, wine and people as they celebrate art in the community.

There were 7,301 households, of which 19.3% had children under the age of 18 living with them, 28.2% were married couples living together, 8.2% had a female householder with no husband present, 3.1% had a male householder with no wife present, and 60.4% were non-families. 35.1% of all households were made up of individuals, and 9.6% had someone living alone who was 65 years of age or older. The average household size was 2.16 and the average family size was 2.86.

All content from Kiddle encyclopedia articles (including the article images and facts) can be freely used under Attribution-ShareAlike license, unless stated otherwise. Cite this article:
Ellensburg, Washington Facts for Kids. Kiddle Encyclopedia.