Irrigon is a city in Morrow County, Oregon, United States, on the Columbia River and U.S. Route 730. The city is part of the Pendleton–Hermiston Micropolitan Statistical Area. The population was 1,826 at the 2010 census.

Irrigon is near the site of a former Columbia River landing called Grande Ronde Landing that vied with Umatilla Landing (Umatilla), 8 miles (13 km) upriver, for water-transportation business. Umatilla Landing prospered, and Grande Ronde Landing did not, and it was eventually renamed Stokes. In 1903, a newspaper editor, Addison Bennett, renamed the community Irrigon, a portmanteau assembled from Irrigation and Oregon. Bennett, who saw irrigation as important to business in the city, published its first newspaper, the Oregon Irrigator, later renamed the Irrigon Irrigator.

Stokes, the site of a railway station by that name, had a post office that operated from 1876 through 1899; Douglas W. Bailey served as postmaster. An Irrigon post office was established in 1903; Frank B. Holbrook was the first postmaster.

According to the Köppen Climate Classification system, Irrigon has a semi-arid climate, abbreviated "BSk" on climate maps.

There were 602 households, of which 44.0% had children under the age of 18 living with them, 58.0% were married couples living together, 11.1% had a female householder with no husband present, 7.8% had a male householder with no wife present, and 23.1% were non-families. 17.4% of all households were made up of individuals, and 6.4% had someone living alone who was 65 years of age or older. The average household size was 3.03 and the average family size was 3.43. 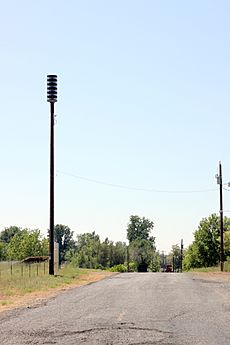 Irrigon is an agriculture- and food processing-based community. The largest employer is Western Alfalfa, a company that makes prepared livestock feeds.

In June 2014, the city made the news when it announced that it would pay a bounty of one dollar for each large trash bag of puncturevine, an invasive plant.

All content from Kiddle encyclopedia articles (including the article images and facts) can be freely used under Attribution-ShareAlike license, unless stated otherwise. Cite this article:
Irrigon, Oregon Facts for Kids. Kiddle Encyclopedia.