Tribulus terrestris is an annual plant in the caltrop family (Zygophyllaceae) widely distributed around the world. It is adapted to grow in dry climate locations in which few other plants can survive. It is native to warm temperate and tropical regions in southern Eurasia and Africa. It has been unintentionally introduced to North America and Australia. An aggressive and hardy invasive species, T. terrestris is widely known as a noxious weed because of its small woody fruit – the bur – having long sharp and strong spines which easily penetrate surfaces such as the bare feet or thin shoes of crop workers and other pedestrians, the rubber of bicycle tires, and the mouths and skin of grazing animals. 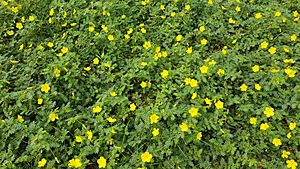 Tribulus terrestris habitus on a beach in the Philippines

Tribulus terrestris is a taprooted herbaceous plant that grows as a summer annual in temperate climates.

The stems radiate from the crown to a diameter of about 10 cm (3.9 in) to over 1 m (3 ft 3 in), often branching. They are usually prostrate, forming flat patches, though they may grow more upwards in shade or among taller plants. 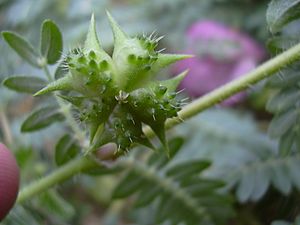 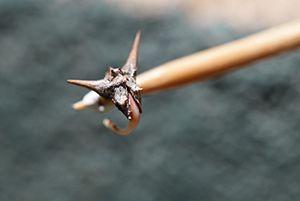 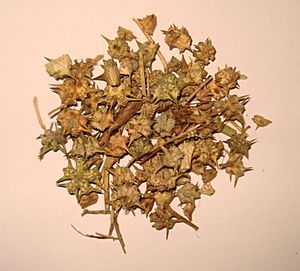 The flowers are 4–10 mm (0.16–0.39 in) wide, with five lemon-yellow petals, five sepals, and ten stamens. In Southern California, it blooms from April through October, where it is highly invasive in waste places and disturbed sites. 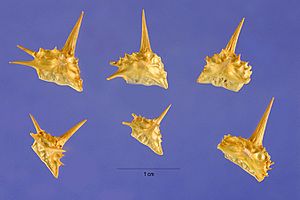 Thumbtack-like Tribulus terrestris burs are a hazard to bare feet and bicycle tires.

After the flower blooms, a fruit develops that easily falls apart into five burs. The burs are hard and bear two to four sharp spines, 10 mm (0.39 in) long and 4–6 mm (0.16–0.24 in) broad point-to-point. These burs strikingly resemble goats' or bulls' heads, characteristics which give the bur its common names in some regions. The "horns" are sharp enough to puncture bicycle tires and other air-filled tires. They can also cause painful injury to bare feet and can injure the mouths of livestock grazing on the plant.

Within each bur, seeds are stacked on top of each other, separated by a hard membrane. As an adaptation to dry climates, the largest seed germinates first, while the others may wait until more moisture is available before germinating. The bur spines point upward, where they stick into feet and fur of animals, serving the purpose of seed dispersal. This causes damage to domesticated livestock and degrades wool. 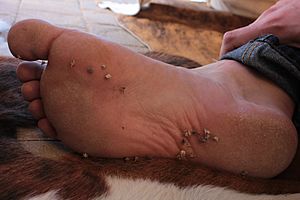 Native to the Mediterranean region, T. terrestris is widespread throughout the world from latitudes 35°S to 47°N. It is distributed across warm temperate and tropical regions of southern Europe, southern Asia, throughout Africa, New Zealand, and Australia. It is present across the United States and in Central and South America. Over the 20th century, the vine appeared in California and became distributed northward, eventually appearing in the Okanagan Valley of south-central British Columbia, Canada where it is classified as a noxious weed.

A network of fine rootlets arise from the taproot to take advantage of soil moisture, by which the plant can survive in arid conditions. It grows in almost any soil, but thrives in dry, loose, sandy soils, and even in sand or in deserts. It can prosper in heavier soils, especially if fertile or moist, and on compacted soils along roadsides.

The Greek word, τρίβολος meaning 'water-chestnut', translated into Latin as tribulos. The Latin name tribulus originally meant the caltrop (a spiky weapon), but in Classical times already the word meant this plant as well.

The plant is widely naturalized in the Americas and also in Australia south of its native range. In some states in the United States, it is considered a noxious weed and an invasive species. It is a declared plant (infestations described under "caltrop") in South Australia.

Although its extract is used as a dietary supplement with the belief that it increases testosterone levels mainly for body-builders, T. terrestris failed to increase testosterone levels in controlled studies, and has not been proven to be safe. There is no evidence it has strength-enhancing properties, or anabolic steroid effects for use as a body-building supplement. 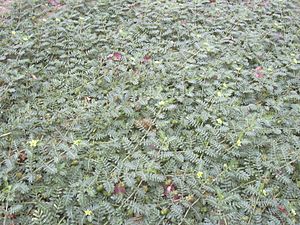 Where this is a non-indigenous species, eradication methods are often sought. There are both biological and herbicidal solutions to the problem, but none of them provide a solution that is both quick and long-lasting, because T. terrestris seeds remain viable for up to seven years on average.

In smaller areas, T. terrestris is best controlled with manual removal, using a hoe to cut the plant off at its taproot. While this is effective, removing the entire plant by gripping the taproot, stem or trunk and pulling upward to remove the taproot is far more effective. This requires monitoring the area and removing the weed throughout the preseeding time (late spring and early summer in many temperate areas). This will greatly reduce the prevalence of the weed the following year. Mowing is not an effective method of eradication, because the plant grows flat against the ground.

Another avenue of physical eradication is to crowd out the opportunistic weed by providing good competition from favorable plants. Aerating compacted sites and planting competitive desirable plants, including broad-leaved grasses such as St. Augustine, can reduce the effect of T. terrestris by reducing resources available to the weed.

In June 2014, the town of Irrigon, Oregon, announced it would pay a bounty of one dollar for each large trash bag of puncturevine.

Chemical control is generally recommended for home control of T. terrestris. There are few pre-emergent herbicides that are effective. Products containing oryzalin, benefin, or trifluralin will provide partial control of germinating seeds. These must be applied prior to germination (late winter to midspring).

After plants have emerged from the soil (postemergent), products containing 2,4-dichlorophenoxyacetic acid (2,4-D), glyphosate, and dicamba are effective on T. terrestris. Like most postemergents, they are more effectively maintained when caught small and young. Dicamba and 2,4-D will cause harm to most broad-leaved plants, so the user should take care to avoid over-application. They can be applied to lawns without injuring the desired grass. Glyphosate will kill or injure most plants, so it should only be used as a spot treatment or on solid stands of the weed. A product from DuPont called Pastora is highly effective but expensive and not for lawn use.

Two weevils, Microlarinus lareynii and M. lypriformis, native to India, France, and Italy, were introduced into the United States as biocontrol agents in 1961. Both species of weevils are available for purchase from biological suppliers, but purchase and release is not often recommended because weevils collected from other areas may not survive at the purchaser's location.

Microlarinus lareynii is a seed weevil that deposits its eggs in the young burr or flower bud. The larvae feed on and destroy the seeds before they pupate, emerge, disperse, and start the cycle over again. Its life cycle time is 19 to 24 days. Microlarinus lypriformis is a stem weevil that has a similar life cycle, excepting the location of the eggs, which includes the undersides of stems, branches, and the root crown. The larvae tunnel in the pith where they feed and pupate. Adults of both species overwinter in plant debris. Although the stem weevil is slightly more effective than the seed weevil when each is used alone, the weevils are most effective if used together and the T. terrestris plant is moisture-stressed.

Toxic compounds in the plant are known to cause liver damage when ingested at harmful dosages. When ingested, phylloerythrin accumulates in the blood as a byproduct of chlorophyl degradation; however, adverse reactions have not been confirmed in humans. In sheep, consumption of T. terrestris causes tribulosis, also known as 'geeldikkop', which is a type of photodermatitis.

The phytochemistry of T. terrestris samples collected from various parts of the world differs significantly. Among the steroidal saponins present in this herb, furostanol saponins are isolated only from T. terrestris of Bulgarian origin. One of the main chemical compounds found in T. terrestris is protodioscin.

Two alkaloids that seem to cause limb paresis (staggers) in sheep that eat Tribulus terrestulis are the beta-carboline alkaloids harman (harmane) and norharman (norharmane). The alkaloid content of dried foliage is about 44 mg/kg.

All content from Kiddle encyclopedia articles (including the article images and facts) can be freely used under Attribution-ShareAlike license, unless stated otherwise. Cite this article:
Tribulus terrestris Facts for Kids. Kiddle Encyclopedia.