The city of Heppner is the county seat of Morrow County, Oregon, United States. The population was 1,291 at the 2010 census. Heppner is part of the Pendleton-Hermiston Micropolitan Area.

Heppner is at an elevation of 2,192 feet (668 m) between the Columbia River to the north and the Blue Mountains to the southeast. The city is along Oregon Route 74, about 60 miles (97 km) southwest of Pendleton and 185 miles (298 km) east of Portland.

Route 74 forms part of the Blue Mountain Scenic Byway, a 130-mile (210 km) set of roads connecting Interstate 84 (I-84) along the Columbia River with the North Fork John Day River in the Blue Mountains. Part of the route follows the Willow Creek drainage through Heppner.

The community is named after Henry Heppner, who partnered with Jackson L. Morrow to open the first store in Heppner in 1873. In that same year, a post office was established in Heppner with George H. Stansbury as the postmaster. This was also the year that a mail and stagecoach line began operations between Pendleton and The Dalles, passing through Heppner.

Morrow, later elected to the state legislature while Heppner was still part of Umatilla County, was instrumental in carving out a new county. The legislature named the new county in his honor.

After Morrow County's creation in 1885, Heppner became the temporary county seat. In 1886, it narrowly defeated Lexington in an election to determine the permanent seat. Heppner was incorporated in the following year. In 1888, the Oregon Railroad and Navigation Company completed a railroad spur from the Columbia River up the Willow Creek drainage to Heppner.

Heppner was almost destroyed by a flash flood on June 14, 1903. The flood was precipitated by a sudden cloudburst and accompanying hail that caused a debris dam collapse and flash flooding, notably on Willow Creek. A wall of water and debris swept down the creeks and canyons and through the city. It has been estimated that 238 people (a quarter of the city's population) drowned, making it the deadliest natural disaster in Oregon's history. Property damage was reported at nearly $1 million. The nearby cities of Ione and Lexington also sustained significant damage. In 1983, the Willow Creek Dam at the outskirts of the city was finished.

The railroad and a growing network of roads had by the early decades of the 20th century made Heppner a trade center and distribution point for regional farm products including wheat, alfalfa, sheep, cattle, horses, and hogs. Despite the flood and two fires in 1918 that destroyed City Hall, the library, many businesses, and more than 30 homes, the community rebuilt. One of its creations, the Heppner Hotel, opened in 1920 and, housing a variety of businesses over the years, it served as a community gathering place through 1972, when its last restaurant closed.

There were 559 households of which 26.1% had children under the age of 18 living with them, 53.3% were married couples living together, 8.2% had a female householder with no husband present, 4.7% had a male householder with no wife present, and 33.8% were non-families. 29.3% of all households were made up of individuals and 14.5% had someone living alone who was 65 years of age or older. The average household size was 2.30 and the average family size was 2.78. 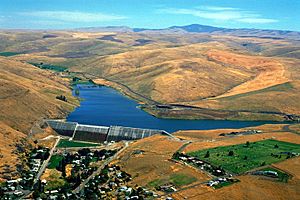 Willow Creek Dam and Lake at Heppner, Oregon. Part of Heppner is visible below the dam.

There were 583 households out of which 28.8% had children under the age of 18 living with them, 56.6% were married couples living together, 7.5% had a female householder with no husband present, and 31.7% were non-families. 28.1% of all households were made up of individuals and 14.8% had someone living alone who was 65 years of age or older. The average household size was 2.36 and the average family size was 2.88.

All content from Kiddle encyclopedia articles (including the article images and facts) can be freely used under Attribution-ShareAlike license, unless stated otherwise. Cite this article:
Heppner, Oregon Facts for Kids. Kiddle Encyclopedia.