Originally named Alkali, Arlington came into existence as a place for shipping cattle down the Columbia River. It was incorporated as Arlington by the Oregon Legislative Assembly on November 20, 1885.

Following the completion of the John Day Dam, the original location of Arlington was moved to higher ground in 1963 to avoid the resulting inundation.

Arlington was the birthplace of musician Doc Severinsen, best known as the musical director for the American television program The Tonight Show Starring Johnny Carson (1967–1992).

According to the Köppen Climate Classification system, Arlington has a semi-arid climate, abbreviated "BSk" on climate maps. 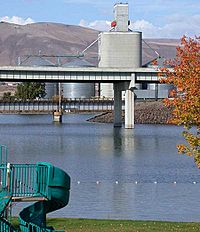 Park in Arlington, looking towards the Columbia River

There were 256 households, of which 30.1% had children under the age of 18 living with them, 45.7% were married couples living together, 8.2% had a female householder with no husband present, 4.3% had a male householder with no wife present, and 41.8% were non-families. 32.0% of all households were made up of individuals, and 8.9% had someone living alone who was 65 years of age or older. The average household size was 2.29 and the average family size was 2.92.

Arlington is located at the intersection of Interstate 84 and Oregon Route 19. I-84 travels west towards Portland and east towards Boise, Idaho; OR 19 connects Arlington to Condon and U.S. Route 26 near Dayville.

The city has a small airport named Arlington Municipal Airport, located on a nearby plateau. In 2011, the U.S. Air Force proposed Arlington as the site of a future United States Department of Defense unmanned aerial vehicle base. 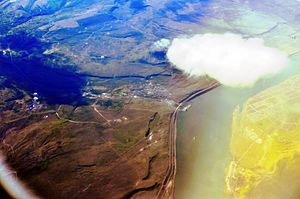 Arlington is home to a sizable Waste Management landfill, notably receiving all of Seattle, Washington's trash and some from Portland, Oregon. In March 2010, Waste Management announced their plans to build a waste gasification plant next to their landfill that uses a plasma gasification technology that at the time was considered experimental. The plasma gasification plant was built in conjunction with the company, InEnTec, whose efforts to build such plants in California and elsewhere have met protest. The plant went into pilot operation in November 2011.

The area around Arlington is largely agricultural farm land with wheat, barley and beef cattle being the principal products.

The area around Arlington is the location of several wind farms: 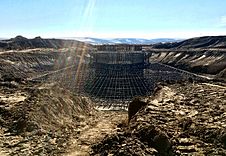 Caithness Energy has the Shepherds Flat Wind Farm, one of the largest land-based wind farms in the world. Approved in 2008 by state regulators, groundbreaking came in 2009. It officially opened in September 2012 and "reached full commercial operations in November 2012." There have been some controversies around the project that emerged in 2009 and 2010.

In fall 2017, construction was started on the Montague Wind Power Project, a project owned and operated by Avangrid Renewables to provide power to Apple Inc.'s Prineville Data Center through Oregon's Direct Access Program. "Apple says Montague will provide it 560,000 megawatt-hours of electricity annually."

All content from Kiddle encyclopedia articles (including the article images and facts) can be freely used under Attribution-ShareAlike license, unless stated otherwise. Cite this article:
Arlington, Oregon Facts for Kids. Kiddle Encyclopedia.