Jefferson County is one of the 36 counties in the U.S. state of Oregon. At the 2020 census, the population was 24,502. The county seat is Madras. The county is named after Mount Jefferson.

Jefferson County was created on December 12, 1914, from a portion of Crook County. The county owes much of its agricultural prosperity to the railroad, which links Madras with the Columbia River, and was completed in 1911, and to the development of irrigation projects in the late 1930s. The railroad was completed despite constant feuds and battles between two lines working on opposite sides of the Deschutes River.

Madras was incorporated in 1911, and has been the permanent county seat since a general election in 1916. The first (temporary) county seat was Culver, which was selected by a three-man commission appointed by the governor. Due to repeated tie votes over several days (with one vote each cast for Culver, Metolius and Madras). The deadlock was eventually broken by allowing the Metolius Commissioner to post the tie-breaker, by voting for Culver. [1]

Rapid development in adjacent Deschutes County, Oregon during the 1990s has farmers in Jefferson County concerned that they may be priced out of their own farmlands, which could be replaced by destination resorts, golf courses, and other amenities for recent arrivals. 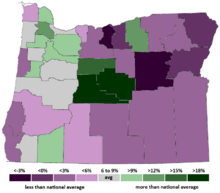 From 2000 to 2007, Jefferson County's population grew by 15.9%, more than twice the national average. It was the third fastest growing county in the state, after neighboring Deschutes and Crook counties.

Agriculture is the predominant source of income in the county, with vegetable, grass and flower seeds, garlic, mint and sugar beets cultivated on some 60,000 acres (240 km2) of irrigated land. Jefferson County also has vast rangelands and until 2016 had an industrial base related to forest products. The Warm Springs Forest Products Industry, a multimillion-dollar complex owned by the Confederated Tribes of Warm Springs — partially located in the northwestern corner of the county — was the single biggest industry. With 300 days of sunshine and a low yearly rainfall, fishing, hunting, camping, boating, water-skiing and rock hunting are major tourist activities.

All content from Kiddle encyclopedia articles (including the article images and facts) can be freely used under Attribution-ShareAlike license, unless stated otherwise. Cite this article:
Jefferson County, Oregon Facts for Kids. Kiddle Encyclopedia.