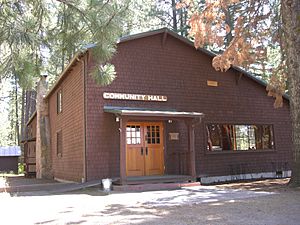 Camp Sherman is an unincorporated community and census-designated place (CDP) in Jefferson County, Oregon, United States. It is located on the Metolius River. The year-round population as of the 2010 census was 233, with that number tripling or more during the summer. The community includes an elementary school, Black Butte School, a general store and a post office (ZIP code 97730). The community also has a volunteer fire department. Camp Sherman was founded by vacationers from Sherman County in the latter part of the 19th century.

In 1949, Luther Metke was a key builder of the Camp Sherman Community Hall, the center of social activity in the community of Camp Sherman, Oregon. In February 2003 it was listed as a National Register of Historic Places due to its rustic architecture highlighting late 19th & Early 20th Century American Movements: Bungalow/Craftsman, Western Stick Architecture

This region experiences warm (but not hot) and dry summers, with no average monthly temperatures above 71.6 °F. According to the Köppen Climate Classification system, Camp Sherman has a warm-summer Mediterranean climate, abbreviated "Csb" on climate maps.

All content from Kiddle encyclopedia articles (including the article images and facts) can be freely used under Attribution-ShareAlike license, unless stated otherwise. Cite this article:
Camp Sherman, Oregon Facts for Kids. Kiddle Encyclopedia.