Antelope is a city in Wasco County, Oregon, United States. It had an estimated population of 47 people as of 2012. The town was incorporated in 1901, though it was founded earlier. The City of Antelope was originally a stage and freight wagon road stop on the Old Dalles to Canyon City Trail. Howard Maupin came to Antelope in 1863 to operate a horse ranch, becoming the caretaker of the stage station that was established by Henry Wheeler in 1864. Maupin began raising cattle to provide meat for travelers. Nathan Wallace, who is sometimes credited with being Antelope's first postmaster, acquired the Antelope stage station from Maupin in 1870. Records indicate the community was considered to have been established in 1872.

In the early 1980s, members of the Rajneesh movement moved in and effectively took over the government of the city by outnumbering the original residents with new voter registrations. On September 18, 1984, a vote was held and the city was renamed to "Rajneesh, Oregon". By 1985, after several of the Rajneesh movement leaders were discovered to have been involved in criminal behavior (including a mass food poisoning attack and an aborted plot to assassinate a U.S. Attorney), their guru left the country as part of a negotiated settlement of federal immigration fraud charges, and the Rajneesh commune collapsed. On November 6, 1985, the city voted to rename itself back to Antelope.

Antelope Valley was probably named by members of Joseph Sherar's party who were packing supplies to mines in the John Day area. Sherar became known as the operator of a toll bridge across the Deschutes River, on a cut-off of the Barlow Road. There were many pronghorns (often called pronghorn antelope) in the area in the early 19th century. 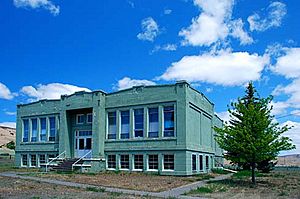 In the mid-19th century, Antelope was along the wagon road connecting The Dalles on the Columbia River with gold mines near Canyon City. After about 1870, the wagon road became known as The Dalles Military Road. The road crossed the Deschutes River on Sherar's Bridge.

Antelope post office was established in 1871, with Howard Maupin, founder of Maupin, Oregon, as the first postmaster. The town's population peaked around 1900, shortly after the Columbia Southern Railway completed a 70-mile (110 km) rail line from Biggs, on the Columbia River, to Shaniko, a few miles north of Antelope. The railroad timetable for September 9, 1900, lists a daily stagecoach run from the train terminal in Shaniko to Antelope and beyond. Antelope was incorporated by the Oregon Legislative Assembly on January 29, 1901.

In the 1980s the town grew again when followers of Bhagwan Shree Rajneesh, who had started the city of Rajneeshpuram on the nearby "Big Muddy Ranch", began to move in. Rajneeshpuram was an intentional community (or commune) of Rajneeshees. On September 18, 1984, Antelope's charter was amended by a vote of 57 to 22 to change the name of the city to Rajneesh. In November, Rajneesh, who had originally pleaded innocent to charges of immigration fraud, changed his plea to guilty and was allowed to leave the United States under the terms of a plea bargain.

On November 6, 1985, the remaining residents, both original and Rajneeshee, voted 34 to 0 to restore the original name, which was never changed by the Postal Service but had been changed and was subsequently restored by the United States Board on Geographic Names. The ranch, 18 miles (29 km) from Antelope, is now owned by Young Life and has been converted into a camp known as "Washington Family Ranch."

Antelope, in Wasco County in north-central Oregon, is along Oregon Route 218 just north of its intersection with Oregon Route 293. By highway, the city is 34 miles (55 km) northeast of Madras and 143 miles (230 km) east of Portland. Antelope Creek, in the Deschutes River watershed, flows by Antelope.

According to the Köppen climate classification system, Antelope has a warm-summer Mediterranean climate (Köppen Csb). 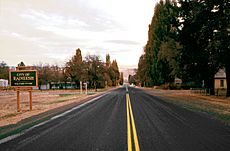 Sign on the entrance to Antelope reading "City of Rajneesh", circa 1985

All content from Kiddle encyclopedia articles (including the article images and facts) can be freely used under Attribution-ShareAlike license, unless stated otherwise. Cite this article:
Antelope, Oregon Facts for Kids. Kiddle Encyclopedia.