Canyon City is a city in Grant County, Oregon, United States. It is the county seat of Grant County, and is about 2 miles (3 km) south of John Day on U.S. Highway 395. As of the 2010 census, the city had a total population of 703.

The city is at an elevation of about 3,200 feet (980 m). Between Canyon City and Burns, to the south, Route 395 passes through parts of the Malheur National Forest. According to the United States Census Bureau, the town has a total area of 1.41 square miles (3.65 km2), all land.

This climatic region is typified by large seasonal temperature differences, with warm to hot (and often humid) summers and cold (sometimes severely cold) winters. According to the Köppen Climate Classification system, Canyon City has a humid continental climate, abbreviated "Dfb" on climate maps.

Canyon City was established in June 1862 as a result of the discovery of gold in Canyon Creek, which flows from the south to meet the John Day River at John Day. As up to 10,000 miners flocked to Whiskey Gulch and other sections of the canyon during the early stages of the rush, land values between Canyon City and John Day rose to about $500 per square yard ($600/m2). Little of this estimated population influx is reflected in U.S. Census Bureau tallies for Canyon City, which have fluctuated between 250 and about 700 since 1870. 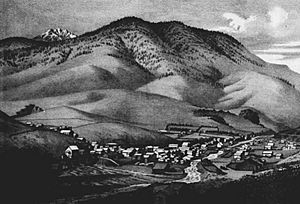 Estimates of the total value of Canyon Creek's gold varied. Geologist Waldemar Lindgren indicated that between $3 million and $5 million in gold was extracted for each of the first three years, 1862–64. Rossiter Raymond, the U.S. Commissioner of Mining Statistics, reported an average of $1.1 million a year between 1865 and 1870, afterward gradually tapering downwards. The figures given by Lindgren and Raymond were based on the fixed value of gold at $20.67 per ounce. As such, these authoritative sources should be interpreted to estimate the annual gold production of Canyon Creek at 150,000 to 250,000 ounces in 1862, 1863 and 1864, then averaging 55,000 ounces each year between 1865 and 1870. Earlier estimates that $16 million in gold was extracted from Canyon Creek were revised to $26 million after the fixed value of gold increased to $35 per ounce in 1933. These figures indicate that gross gold production from Canyon Creek for the 40 years between 1862 and 1902 was approximately 800,000 ounces. In 2013, at $1,400 per ounce, that gold would be valued at $1.12 billion. Gold production continued for another 40 years, until 1942, when the War Labor Board issued L-208, which prohibited gold mining and effectively killed the gold mining industry in the United States.

Many miners and others entered the area along a wagon road linking The Dalles on the Columbia River, with Canyon City. A few years later, this road was part of the template for what became known as The Dalles Military Road.

The city was platted in 1862 and was chosen as the county seat two years later, when Grant County was split from Wasco County. Canyon City was incorporated in 1891, and voters elected C. W. Parrish as the first mayor.

Canyon City has been described as the "Deadwood of Oregon" and is the site of a Boot Hill Cemetery.

There were 322 households, of which 21.4% had children under the age of 18 living with them, 51.6% were married couples living together, 7.8% had a female householder with no husband present, 2.2% had a male householder with no wife present, and 38.5% were non-families. 33.9% of all households were made up of individuals, and 14.9% had someone living alone who was 65 years of age or older. The average household size was 2.16 and the average family size was 2.73.

The biggest employer in Canyon City as of 2002 was the county government, which had employees in the courthouse, the jail, and the road and health departments. The second biggest employer was Grant School District, in the district office and in Humboldt Elementary School. The next three biggest were Grayback Forestry, a reforestation and fire-suppression company; Jackson Oil, a gas station, mini-mart, and office; and an Oregon Department of Transportation maintenance shop.

All content from Kiddle encyclopedia articles (including the article images and facts) can be freely used under Attribution-ShareAlike license, unless stated otherwise. Cite this article:
Canyon City, Oregon Facts for Kids. Kiddle Encyclopedia.