John Day is a city located about 2 miles (3.2 km) north of Canyon City in Grant County, Oregon, at the intersection of U.S. Routes 26 and 395. The city was named for the nearby John Day River, which had been named for a Virginian member of the 1811 Astor Expedition, John Day. The city was incorporated in 1901.

The first homestead staked in Grant County (what was then Wasco County), in 1862 by B. C. Trowbridge, was within the limits of the present city of John Day. The Eastern Oregon community was not as quick to grow as neighboring Canyon City, which was the county seat and center of the bustling mining industry in the area. Incrementally, local merchants and residents began relocating to John Day—primarily each time after severe fires in Canyon City: the Grant County Courthouse burned in 1870, Chinatown burned in 1885, and fires in 1898 and 1937 devastated Canyon City's downtown. 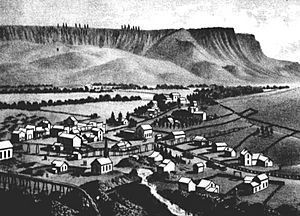 The first post office at "John Day City" was established in 1865, but was discontinued in 1871. It was reestablished in 1879 with the name John Day. In April 1900, a local committee was elected, and the Oregon Legislature approved an Act incorporating the city of John Day on February 23, 1901.

The largest part of early John Day was composed of the Chinese community, commonly called Tiger Town. In 1882, the Advent Christian Church in John Day had 547 members, 382 of whom were Chinese (and a number of Chinese residents were interred in the Seventh Day Adventist Cemetery). By 1887, John Day was home to nearly 1,000 Chinese immigrants, who had been attracted to the area by a gold rush 20 years earlier, many of whom were displaced by the 1885 fire in Canyon City.

A trading post built in the area in the 1860s along The Dalles Military Road was purchased in 1887 by two Chinese immigrants, Lung On and Ing Hay. They converted the trading post into a clinic, general store, and social center for the community, which continued to operate until the 1940s. In the 1970s the building, then the property of the city of John Day, was converted into a museum called the Kam Wah Chung & Co. Museum. It is now operated in conjunction with the Oregon Parks and Recreation Department and is one of the premier surviving examples of a 19th-century Chinese apothecary shop. It was designated a National Historic Landmark in 2005.

The bedrock geology of the John Day area is a complex assemblage of Permian to Triassic age metamorphic and igneous rocks which were added to the western North American continental margin by tectonic activity in the Triassic and Jurassic Periods. Cenozoic age volcanic rocks related to the long-lived Columbia River Basalt emplacement were deposited above these bedrock units.

The area around John Day contains some of the most important paleontological resources known. From about the time the dinosaurs disappeared right up until the Pleistocene, the region was subjected to significant volcanism and other processes that preserved many fossils. Because the matrix in which the fossils are entombed is datable, the fossils themselves can be dated with excellent precision. This gives paleontologists the ability to study how species changed over time and also how the relationship between ecosystems and climate changed.

Spanish explorers in the 17th century reportedly explored the area for gold, but none was found.

Despite its warm, dry climate and inland location, John Day has as an oceanic climate (Cfb) according to the Köppen climate classification system. However, it nearly qualifies as a steppe climate (Köppen BSk) due to its relative aridity, and as a humid continental climate (Köppen Dfb) due to its cold winter temperatures.

There were 794 households, of which 26.8% had children under the age of 18 living with them, 41.4% were married couples living together, 11.6% had a female householder with no husband present, 3.7% had a male householder with no wife present, and 43.3% were non-families. 37.9% of all households were made up of individuals, and 18.5% had someone living alone who was 65 years of age or older. The average household size was 2.13 and the average family size was 2.79. 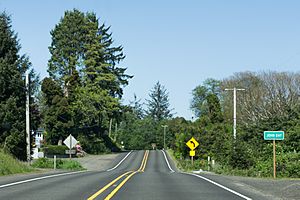 The unincorporated community of John Day in Clatsop County, Oregon

The John Day place name occurs also in Clatsop County, Oregon. The unincorporated community of John Day is included within the 97103 ZIP Code for Astoria.

Historically, industrial and agricultural businesses like gold mining, sheep and cattle ranching, timber harvesting, and lumber milling have been the economic mainstays of the community. However, federal policies that shut down all gold mining in the United States in 1942, the decreasing availability of ponderosa pine due to a lack of timber sales, and relatively high transportation costs have resulted in a significant decrease in the viability of the resource-based economic sector. Other employments, such as in recreation, health care, and government (the headquarters of the Malheur National Forest administration is located in John Day) now account for a majority of jobs in the city.

All content from Kiddle encyclopedia articles (including the article images and facts) can be freely used under Attribution-ShareAlike license, unless stated otherwise. Cite this article:
John Day, Oregon Facts for Kids. Kiddle Encyclopedia.