Mount Bachelor ski resort (stylized as Mt. Bachelor) is a ski resort located in Central Oregon, approximately 22 miles (35 km) west of Bend, along Century Drive Highway. The ski area is on the northern side of Mount Bachelor, a stratovolcano rising atop a volcanic shield in the Cascade Range.

Since 2001, the ski area has been owned by Powdr Corporation of Park City, Utah. It is the largest ski resort (by area) by more than 1,000 acres (4.0 km2) in Oregon, the second largest single-mountain ski resort in the U.S., behind Vail, and the sixth largest of all ski resorts in the nation.

Mount Bachelor offers one of the nation's longest ski seasons, mid-November through the end of May (weather permitting).

The Mount Bachelor Ski Area was founded by former 10th Mountain Division Elite Force ski trooper Bill Healy (1925–1993) on December 19, 1958, with $75,000 (equivalent to $553 thousand today2018) and a one-year lease from the U.S. Forest Service for the land. The four other major stockholders were Felix Marcoulier (1917–2004), Dr. Bradford Pease (1912–2004), Oscar Murray (c. 1917–present), and Phil Gould. The founders raised $100,000 from local investors and made many important management decisions that would shape the path of Mount Bachelor and Central Oregon for decades to come.

The ski area opened as Bachelor Butte in October 1958 with a rope tow and a 3,100-foot (940 m)-long platter lift rising 1,000 ft (305 m); a lift ticket was three dollars (equivalent to $22.11 today2018). The name of the volcano was changed to Mount Bachelor in 1983 after the Bend Chamber of Commerce persuaded state and federal officials to adopt the more descriptive term "mountain." Well-known broadcaster and avid skier Lowell Thomas visited the young ski area in 1961, flying over from Sun Valley with agribusiness magnate J. R. Simplot.

The first chairlift was "black chair" in 1961, shortly followed by "red chair" in 1964. In 1967 and 1970 the yellow and blue chair lifts were added, and in 1973 the green and orange chair lifts were added. The "Outback chair" was added in 1976, "Rainbow" in 1980, and "Sunrise" in 1982. The first area of the mountain developed for skiing was the northeastern side. The northwestern side was not lift-served in 1973, but those who ventured for the "Outback Trail Tour" paid a dollar in advance and got a return ride by a snowcat to the lodge. A new trail was finished in 1975, and the Outback double chairlift was installed at a cost of $700,000. It was replaced by the $3 million high-speed quad (Outback Express) in the summer of 1987; with a capacity of 2,800 passengers per hour. The 8,377-foot (2,553 m)-long Northwest Express chairlift was added in 1996, a high-speed quad with 2,365-foot (721 m) vertical. This lift further expanded the terrain to the west and increased the resort's overall vertical, lowering the minimum lift-served elevation to 5,700 feet (1,740 m). In 1976, Mount Bachelor had a severe drought and was only open January 2 through February 14, and February 26 through April 30. There was a loss of an estimated $4 million which took four years to recover. Following the drought, the Nordic initiative began and the main lodge expanded.

Plans for the first summit chairlift were announced in autumn 1979; the high-speed detachable triple was installed in the summer of 1983. At the time, it was just the second detachable chairlift installed in the world. It was upgraded to a quad in 1997. Original plans for a summit lodge and an accompanying service road were abandoned in 1982 to attain approval from the U.S. Forest Service.

Due to its challenging terrain parks and excellent snow conditions, Mount Bachelor is the official home training resort of many professional and Winter Olympic athletes, and hosts several professional USSA competitions each year.

The mountain is famous for its dry snow (for the Pacific Northwest), with typical snowfall of over 462 inches (1,170 cm) per year and a mid-winter base over 150 inches (380 cm). The resort boasts a lift-served vertical drop of 3,365 feet (1,026 m) with a lift running to 9,000 feet (2,743 m), just 65 feet (20 m) below the volcano's summit, which is accessible via a short hike. As one of the tallest mountains in the vicinity, Mount Bachelor often experiences high wind speeds causing the chairlift to the summit to be put on standby. 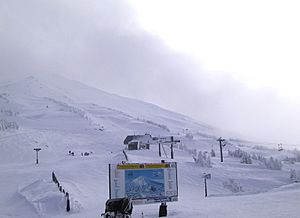 Ski area in the winter 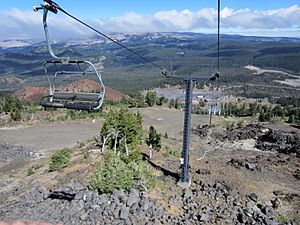 Chairlift in the summer

Following the Summit triple in 1983, the Pine Marten was the first express quad, installed in the summer of 1986. The accompanying lodge at the top of Pine Marten was built two years later. The Pine Marten Express was the world's first height-adjustable detachable quad. It was overhauled in 2006 for $3.5 million, with new terminals, cable, and all new moving parts. The Outback Express was installed in 1987 and the Skyliner Express in 1989.

Mount Bachelor has outlined in its master plan that it intends to replace its Sunrise Express to a high-speed six-pack, along with replacing its Rainbow triple chairlift with a high-speed quad. In addition, the ski area plans to expand its downhill mountain bike terrain and install a zip-line.

In the early 1990s, Mount Bachelor had intentions of installing an 8 passenger high speed gondola which would run from the Sunriver access road to the base area of the Sunrise lodge. However, while marketed in ski magazines, this gondola was never built.

In recent years, Mount Bachelor has made sweeping efforts to attract freestyle skiers and snowboarders. A 400-foot (122 m) super pipe is among the best on the continent, and hosted the 2006 USSA Olympic Qualifier. The resort's Bachelor Parks terrain park encompasses 3 parks, is nearly a mile (1.5 km) long, descending 850 vertical feet (260 m) and featuring a number of jumps, rails, boxes, and jibs for freestyle riders. Other parks include "Slopestyle Arena", and "Sunshine Park" for beginners.

Mount Bachelor offers lift accessed skiing and snowboarding seven days a week from mid-November to the end of May. Hours are generally 9:00 a.m. to 4:00 p.m. On nice weather days Mount Bachelor offers skiing 360 degrees off the summit of the mountain. Bachelor holds some of the driest snow relative to the Cascades. The mountain's wide variety of elevation and aspect allows skiers and snowboarders to find good snow nearly every day of the season. Many avid skiers and snowboarders can access a bulge on the north side of the mountain referred to as 'the cone' by hiking before, during and after the resorts typical hours of operation.

Mount Bachelor has the longest groomed Nordic season in North America, running from mid-November through late-May. Snow conditions may extend into June.

Starting in the summer of 2013, Mount bachelor was granted a special use permit from the Forest Service allowing chairlift for downhill mountain bike laps. Mountain bike trail continue to be developed, varying from a family-friendly single track trail to "bad to the bone" downhill bike park.

Other features at Mount Bachelor include snowshoeing, dog sledding, interpretive tours and snow-tubing. Seven restaurants, three bars, and three coffeehouses on the premises are distributed in four day lodges. Additional accommodations and lodging are nearby at Sunriver and in the city of Bend.

Number of guests per day.

All content from Kiddle encyclopedia articles (including the article images and facts) can be freely used under Attribution-ShareAlike license, unless stated otherwise. Cite this article:
Mount Bachelor ski area Facts for Kids. Kiddle Encyclopedia.