Freestyle skiing is a skiing discipline comprising aerials, moguls, cross, half-pipe and slopestyle as part of the Winter Olympics. It can consist of a skier performing aerial flips and spins, and can include skiers sliding rails and boxes on their skis. It is also commonly referred to as freeskiing, jibbing, as well as many other names around the world.

Ski acrobatics have been practiced since the 1930s. Aerial skiing was popularized in the 1950s by Olympic gold medalist Stein Eriksen. Early US competitions were held in mid 1960's. The International Ski Federation (FIS) recognized freestyle as a sport in 1979 and brought in new regulations regarding certification of athletes and jump techniques in an effort to curb the dangerous elements of the competitions. The first FIS Freestyle Skiing World Cup was staged in 1980 and the first FIS Freestyle World Ski Championships took place in 1986 in Tignes, France. Freestyle skiing was a demonstration event at the 1988 Winter Olympics in Calgary. Mogul skiing was added as an official medal event at the 1992 Winter Olympics in Albertville, and the aerials event was added for the 1994 Winter Olympics in Lillehammer. In 2011, the International Olympic Committee (IOC) approved both halfpipe and slopestyle freeskiing events to be added to the 2014 Winter Olympics in Sochi, Russia. 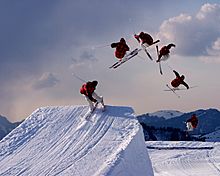 Aerialists ski off 2-4 meter jumps, that propel them up to 6 meters in the air (which can be up to 20 meters above the landing height, given the landing slope). Once in the air, aerialists perform multiple flips and twists before landing on a 34 to 39-degree inclined landing hill about 30 meters in length. The top male aerialists can currently perform triple back flips with up to four or five twists.

Aerial skiing is a judged sport, and competitors receive a score based on jump takeoff (20%), jump form (50%) and landing (30%). A degree of difficulty (DD) is then factored in for a total score. Skiers are judged on a cumulative score of LIMA two jumps. These scores do not generally carry over to the next round.

Aerialists train for their jumping maneuvers during the summer months by skiing on specially constructed water ramps and landing in a large swimming pool. An example of this is the Utah Olympic Park training facility. A water ramp consists of a wooden ramp covered with a special plastic mat that when lubricated with sprinklers allows an athlete to ski down the ramp towards a jump. The skier then skis off the wooden jump and lands safely in a large swimming pool. A burst of air is sent up from the bottom of the pool just before landing to break up the surface tension of the water, thus softening the impact of the landing. Skiers sometimes reinforce the skis that they use for water-ramping with 6mm of fiberglass or cut holes in the front and back in order to soften the impact when landing properly on their skis.

Moguls are a series of bumps on a trail formed when skiers push the snow into mounds or piles as they execute short-radius turns.

Ski ballet (later renamed acroski) was a competitive discipline until the International Ski Federation ceased all formal competition of this event after 2000.

Ski cross is based on the snowboarding boardercross. Despite it being a timed racing event, it is often considered part of freestyle skiing because it incorporates terrain features traditionally found in freestyle.

Half-pipe skiing takes the well-known halfpipe to the next level. Competitors gradually ski to the end of the pipe by doing flips and tricks.

Twin-tip skis are used in events such as slopestyle and halfpipe. Mogul skis are used in moguls and sometimes in aerials. Specially designed racing skis are used in ski cross. Ski bindings took a major design change to include plate bindings mounted to the bottom of the skiers boot to allow for multi-directional release.

All content from Kiddle encyclopedia articles (including the article images and facts) can be freely used under Attribution-ShareAlike license, unless stated otherwise. Cite this article:
Freestyle skiing Facts for Kids. Kiddle Encyclopedia.