Newberry National Volcanic Monument was designated on November 5, 1990, to protect the area around the Newberry Volcano in the U.S. state of Oregon. The monument was created within the boundaries of the Deschutes National Forest, which is managed by the U.S. Forest Service, and includes 54,822 acres (86 sq mi; 222 km2) of lakes, lava flows, and geologic features in central Oregon.

The volcano was used for training Apollo astronauts 1964-1966.

The highest point within the monument is the summit of Paulina Peak at 7,985 ft (2,434 m), with views of the Oregon Cascades and the high desert. Paulina Peak may be accessed by road during the summer months, and as the road is both steep and rough, with hairpin turns towards the summit, trailers or long vehicles are discouraged. The summit area of Newberry Volcano holds two alpine lakes full of trout, East Lake and Paulina Lake.

The Big Obsidian Flow, created 1,300 years ago, covers 700 acres (280 ha). The black, shiny obsidian field is easily accessible from good roads within the caldera, or a trail that traverses the flow. 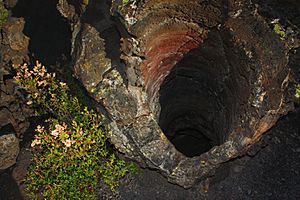 A tree mold in the Lava Cast Forest

Lava Butte is roughly 11 miles (18 km) south of Bend, Oregon. Lava Butte is a cinder cone volcano that rises 500 feet (150 m) above the Lava Lands Visitor Center. It can be accessed by either vehicle or hiking up a paved road. Interpretive signs, views of the surrounding lava flow and mountains, and an active fire lookout are found on top.

There are twelve trails within Newberry Caldera ranging from 0.25 miles to 21 miles. These trails offer a variety of uses from hiking only to multiuse with hiking, biking, and horse allowed. Along the trails you can find access to fishing, viewpoints, interpretive signs, picnic areas, and even hot springs. There are seven boat launches for water recreationists, (the lakes do restrict boats to 10 miles per hour). The Caldera also offers nine camp sites accommodating both tent and RV camper. Newberry Caldera also offers a variety of winter activates such as snowmobiling, snowshoeing, cross country skiing, and rooms for rent at the resorts.'

All content from Kiddle encyclopedia articles (including the article images and facts) can be freely used under Attribution-ShareAlike license, unless stated otherwise. Cite this article:
Newberry National Volcanic Monument Facts for Kids. Kiddle Encyclopedia.