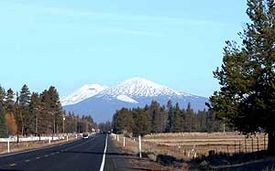 View of the Cascades near La Pine

La Pine is part of the Bend, Oregon Metropolitan Statistical Area. The population was 2,512 people as of the 2020 Census. La Pine is in an isolated area of Central Oregon, consisting of a loose collection of homes and businesses along U.S. Highway 97 about 30 miles (48 km) southwest of Bend. Several peaks of the Cascade Range are prominently visible from the community.

La Pine is in the valley of the Little Deschutes River, a tributary of the Deschutes River. The river provides recreational opportunities such as fishing, swimming, canoeing and other leisure activities.

La Pine was founded in the 19th century with Huntington Road as the main street. The fledgling community quickly grew and prospered until the combination of a failed community water system and rapid growth of Bend caused a slowdown to occur. Today, La Pine is beginning to grow once again, but this time as a commuter town to Bend, making Deschutes County one of the fastest-growing counties in America.

La Pine had remained an unincorporated community for many years. A measure to incorporate in the 2000 elections was rejected by a 2–1 ratio. In the elections of 2006, another incorporation measure was placed on the ballot (one of two such measures in Oregon that year; the other being for Bull Mountain, Oregon). The La Pine measure passed, creating the City of La Pine. The city occupies 7 square miles (18 km2), and at the time of incorporation, had 1,585 residents as of December 2006. Much of the former census-designated area lies outside the city limits.

11.6% of people in La Pine claimed status as United States military veterans, compared to the all-Oregon average of 8.3%

78.0% of workers were employees of private companies; 4.0% of workers worked for the local, state or federal government, compared to the all-Oregon average of 13.8%; 2.9% of workers were self employed in their own incorporated business; 12.7% of people were self-employed in their own not-incorporated business or were unpaid family workers. The number of women workers in industries such as Agriculture, Forestry, Fishing and Hunting; as well as in Computer, Engineering and Science Occupations, was statistically 0.0% at the time of the Census, compared to the all-Oregon averages of 20.0% and 27.5%, respectively.

The main road in the city is U.S. Route 97, which runs north-south through the entire city. Oregon Route 31's northern terminus is approximately one-mile south of the city limits. A rail line of Burlington Northern Santa Fe Railway also runs through La Pine, parallel to U.S. 97.

All content from Kiddle encyclopedia articles (including the article images and facts) can be freely used under Attribution-ShareAlike license, unless stated otherwise. Cite this article:
La Pine, Oregon Facts for Kids. Kiddle Encyclopedia.