Steens Mountain is in the southeastern part of the U.S. state of Oregon, and is a large fault-block mountain, Located in Harney County, it stretches some 50 miles (80 km) north to south, and rises from alongside the Alvord Desert at elevation of about 4,200 feet (1,300 m) to a summit elevation of 9,733 feet (2,967 m). It is sometimes confused with a mountain range but is properly a single mountain.

The mountain was called the "Snowy Mountains" by John Work, one of the fur traders who were the first Europeans in the area. It was renamed in 1860 for United States Army Major Enoch Steen, who fought and drove members of the Paiute tribe off the mountain. 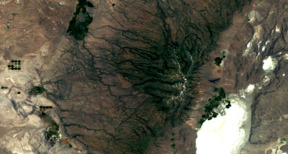 The east face of Steens Mountain is composed mainly of basalts stacked one upon another. Lava flows several hundreds of feet thick inundated the region between 17 and 14 million years ago. 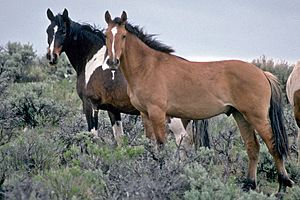 Steens Mountain is distinctive in its absence of conifers, especially Ponderosa Pine and Douglas Fir, at elevations in which they would normally be found - from 5,500–8,000 feet (1,700–2,400 meters) above sea level. Although other mountains of the Great Basin also lack conifers, Steens Mountain is the largest mountain area without conifers. One possible cause of the absence of conifers is the isolation of Steens Mountain, although lack of seed dispersal by bird species such as Clark's Nutcracker may also be a factor. It is also possible that prehistoric fires, including fires used by Native Americans, eradicated the conifer population. Home to a wide variety of animals, the area is primarily known for birding, hunting, and fishing. Golden eagles, owls, and the protected sage grouse. Other animals found in the area include rattlesnakes, scorpions, elk, big horn sheep, pronghorn antelope, and cougars. The area is home to wild horses. Drawing much controversy, the Bureau of Land Management engages in wild horse roundups every few years employing helicopters to herd the horses. Historically, Steens Mountain Wilderness was once home to grizzly bears; a skull was unearthed in nearby Malheur Lake. In the 1970s, a wolverine was trapped and released on Steens Mountain. 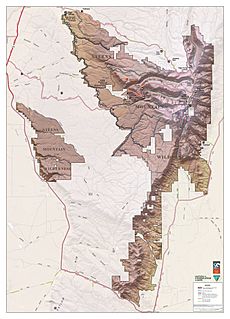 On October 24, 2000, President Bill Clinton approved the Steens Mountain Cooperative Management and Protective Act. The act was created by local landowners in cooperation with local and national government representatives in response to a proposed National Monument. This act created the Steens Mountain BLM Cooperative Management and Protection Area, a 425,000-acre (1,720 km2) area. This law protects 1,200,000 acres (4,860 km2) from mining, and 100,000 acres (405 km2) from cattle grazing.

The west slope of Steens Mountain is traversed by a 52-mile (84 km) loop road, which is suitable for passenger vehicles. The road reaches an elevation of 9,700 feet (3,000 m), making it the highest road in Oregon. It is possible to drive almost to the summit of the mountain and to other viewpoints such as Kiger Gorge. Steens Mountain is also host to Steens Mountain High Altitude Running Camp.

Other recreational activities enjoyed on and around Steens Mountain are camping, picknicking, bicycling, hiking, hunting, sightseeing, soaring, and exploring. There are numerous hot springs along the base of Steens Mountain, including Alvord Hot Springs. Far from city lights, stargazing is also popular.

All content from Kiddle encyclopedia articles (including the article images and facts) can be freely used under Attribution-ShareAlike license, unless stated otherwise. Cite this article:
Steens Mountain Facts for Kids. Kiddle Encyclopedia.