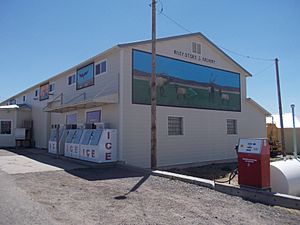 Riley is an unincorporated community in Harney County, Oregon, United States, located at the crossroads of U.S. Highway 395 and U.S. Highway 20, milepost 104, about 28 miles (45 km) west of Burns, the seat of Harney County. The elevation of Riley is 4,226 feet (1,288 m). The town presently consists entirely of two service establishments with attached apartments: a post office, and a general store with gas pump and garage service. It exists to serve the rural farming and ranching community that surrounds it, and highway travelers.

The town began with the establishment of a post office in about 1885, and was named for stockman Amos Riley of the ranching partnership Riley and Hardin. Previously, the nearest post office was at Hardin, 75 miles (121 km) northwest of Riley, so the people who lived along Silver Creek made Riley their new gathering spot. Riley's post office closed in 1919, but was reopened in 1949 after an office at Suntex was closed.

The Oregon Department of Transportation has a camera for road and weather conditions located at the intersection of U.S. 20 and U.S. 395 in Riley, facing west-northwest.

According to the Köppen Climate Classification system, Riley has a semi-arid climate, abbreviated "BSk" on climate maps.

In the 21st century, Riley is a stop on the Eastern POINT intercity bus line between Bend and Ontario. It makes one stop per day in each direction.

All content from Kiddle encyclopedia articles (including the article images and facts) can be freely used under Attribution-ShareAlike license, unless stated otherwise. Cite this article:
Riley, Oregon Facts for Kids. Kiddle Encyclopedia.